S.H.I.E.L.D. Agent Phil Coulson returns from the dead to assemble a team of ‘Level 7’ agents to investigate the appearance of a hooded ‘hero’ with special abilities…

After much anticipation, Marvel’s small screen companion to their behemoth big screen franchises has been rolled out to an audience hungry for more comic book superhero action.  It’s always difficult (nor fair) to assess a series based on its premiere episode yet the pilot of Agents of S.H.I.E.L.D. shows a lot of promise for Marvel to replicate their big screen success on a smaller scale.

Just as Marvel cultivated their plans to assemble ‘Earth’s Mightiest Heroes’ (culminating in the colossal Avengers Assemble) they set about grouping together a team of small screen heroes in a much quicker fashion as we’re introduced to crack spy Grant Ward, former field agent Melinda May, troublesome hacker/internet activist Skye and techno nerds Fitz and Simmons.

Bringing these disparate individuals together is Clark Gregg, making a confident and welcome return as S.H.I.E.L.D. (that’s ‘Strategic Homeland Intervention and Logistics Division’) Agent Phil Coulson who together with Samuel L. Jackson’s Nick Fury has helped bind together the Marvel Cinematic Universe and whose apparent death (in Avengers Assemble – a moment that will now have lost some of its emotional punch) we learn was a ruse to give those iconic cinematic superheroes cause to unite.

Dalton and Bennett have a chance to share some chemistry and goofy whiz kids Fitz and Simmons playfully bounce off one another (whether this will become annoying remains to be seen) but there’s clearly some work to be done to flesh out and find the voices of these characters.  Potentially the most interesting member of the team is Ming Na-Wen’s character, Melinda May, reluctantly enlisted by Coulson for a return to field duty – leaving tantalising hints of a back story to be explored as the series unfolds.

I was initially sceptical as to how AoS could co-exist with the Marvel Cinematic Universe and was pleased to see this achieved successfully with well integrated references to the wider Marvel universe weaved neatly throughout (inclduing significant links to Iron Man Three).  There’s also an appearance from Cobie Smulders returning as Fury’s right hand woman, Maria Hill.  Smulders felt a little lost in the mix in Avengers Assemble so perhaps once long running sitcom How I Met Your Mother comes to a close this season we may see more of her both in AoS and in Marvel’s future big screen endeavours.

The abundance of references are generally pleasing and don’t feel forced but going forward there may not be as much need to provide as many links.  An over reliance on them would become stale (even cumbersome) and hopefully the right balance will be struck as the series develops.

Overall this series premiere has a fairly successful mix of action, humour and intrigue that should ensure a sizeable audience.  There’s some work to be done in terms of the characters and developing the show’s own mythology (as there always is with any new series) but the pilot is stylish with good production values and a script that flows comfortably, making good work of introducing the characters in such a short space of time.  Whilst Joss Whedon’s direction in Avengers Assemble felt a little confined and ‘televisual’ at times it works well here, giving the pilot of AoS drive, complemented by its glossy and expensive look.  Given the success of Avengers Assemble it was more or less a given that Marvel would (wisely) tap the talents of Whedon to help secure their footing on the small screen and hopefully there are big things to come.

The bottom line:  The pilot of Agents of S.H.I.E.L.D. presents exciting prospects for the expansion of the Marvel universe – it’s slick, fun, action packed and holds enough interest to keep viewers watching.

Marvel’s Agents of S.H.I.E.L.D. airs in the UK on Fridays at 8pm on Channel 4.  US viewers can catch it Tuesday nights on ABC.

What did you think of Agents of S.H.I.E.L.D. ?  Share your thoughts below! 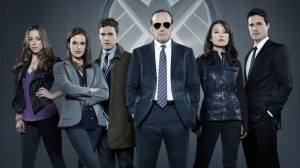 Agents assembled – Marvel’s ‘Agents of S.H.I.E.L.D.’ is off to a promising start with a slick and enjoyable series premiere.