Happy New Year!  I hope you’ve all had a blast and ready to settle back into normality (depressing, I know).  With 2014 now underway and numerous geek treats in store in the coming months I thought I’d take a look back at a personal selection of some of the highlights, controversies and reactions surrounding the various releases, announcements and fanboy/girl meltdowns of 2013.  Be warned, the below contains some minor spoilers…

Almost a year after assembling their Avengers, Marvel Studios unleashed their next salvo on film going audiences across the globe.  Iron Man Three burst onto screens, quickly passing the $1 billion mark in box office gross (and now established as the highest grossing film of 2013).

It’s a film I had issues with on theatrical release primarily due to the slapstick handling of the Mandarin (he’s just an actor?!).  Still, I bought the Blu-ray and despite the odd lingering quibble, I was glad to find on reflection that Iron Man Three is actually rollicking good fun.  As a fan of Iron Man comics for many years, it’s still not quite the more serious interpretation of the character that I would like to see but one I’ve certainly warmed to and there’s no doubting the talents of Robert Downey Jr.

We also saw the return of Marvel’s titular ‘God of Thunder’ with the release of Thor: The Dark World, a bigger and bolder sequel that, although perhaps lacking a stronger emotional core, proved every bit as entertaining as Kenneth Branagh’s Thor (and surpassing its takings at the box office) featuring a reliably fun performance from Chris Hemsworth and another star turn from the phenomenal Tim Hiddleston as the menacing Loki.

Not content with simply dominating the multiplex, Marvel commenced their attack on television screens with the highly anticipated Agents of S.H.I.E.L.D.  Developed by Avengers Assemble maestro Joss Whedon, we saw the welcome return of Agent Phil Coulson (Clark Gregg) in Marvel’s companion piece (or promotion between films if I was wearing my cynical hat) to their cinematic universe which launched with a slick and promising pilot.  Now at mid-season the series certainly has its creative shortcomings, the family-friendly ‘case of the week’ already becoming a little tiresome but as the characters are being fleshed out I have hopes that with some growth in mythology it can improve so, we’ll see.

Of course there are still all those comic books hitting newsstands (both physical and virtual) week in, week out…

Before jumping aboard the Millennium Flacon and heading off to a galaxy, far, far away (Star Wars Episode VII inbound December 2015), director/producer J.J. Abrams successfully guided Star Trek Into Darkness onto cinema screens…but not without a healthy measure of fan controversy.

Opening to generally positive reviews from critics and film goers alike, the Trek fan base was well and truly shook up by the revelation of the film’s central villain and numerous nods to earlier cinematic voyages (most significantly Star Trek II: The Wrath of Khan).  Was the inclusion of Khan a sound decision?  It sat well with me – Benedict Cumberbatch turned in an enjoyably weighty performance and provided high stakes for the crew of the Enterprise and it’s certainly not the first time an established character has been reinterpreted for a modern audience.

I certainly consider myself a ‘hardcore’ fan (I love Star Trek more than any other geek franchise) and felt that Into Darkness was a breathtaking piece of blockbuster entertainment, featuring strong performances from Chris Pyne and Zachary Quinto, a pleasing secondary villain in Peter Weller’s Admiral Marcus and some neat homages that should be permitted so long as future instalments don’t rely on them.

With Abrams’ commitment to Star Wars, the director’s chair has been left vacant and as Star Trek and Star Trek Into Darkness screenwriter Roberto Orci teams up with fresh blood – Patrick McKay and J.D. Payne – to forge the next adventure for Kirk and the crew of the Enterprise, the search for Abrams’ successor goes on, Attack the Block’s Joe Cornish now all but ruled out.  As the 50th Anniversary of Star Trek approaches, a 2016 release date for Star Trek 3 (or 13 depending on how you look at it) is likely so we should certainly expect an announcement before the end of the year.

Look out for Part Two next week!

What are your thoughts on the above? Or do you have a favourite geek highlight of 2013? Leave a comment! 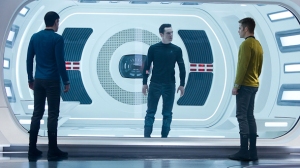 His name is…John Harrison, no wait, it’s – KHAN! A solid reinterpretation of the iconic character by Benedict Cumberbatch in ‘Star Trek Into Darkness’.