The long awaited continuation of Frank Miller’s Dark Knight saga is finally here as The Master Race is unleashed upon the DC Comics readership who have anticipated this title with both excitement and trepidation.  The sequel to Miller’s seminal masterpiece The Dark Knight Returns and the not-so-well received and downright bizarre The Dark Knight Strikes Again, The Master Race sees Miller team up with celebrated comics writer Brian Azzarello – known for having penned numerous standout DC Comics stories including Batman: “Broken City”, Superman: “For Tomorrow”, Joker and Lex Luthor (as well as a highly regarded run on Wonder Woman for DC’s New 52).

Whilst Miller’s contribution to comics cannot be understated and both Year One and The Dark Knight Returns are definitive Batman stories, his later work was found to be less so and it’s clear that Azzarello has worked with Miller to refine and filter his ideas to deliver something more cohesive and classic that both harkens back to those aforementioned masterworks and simultaneously brings the world of The Dark Knight up to date.  In terms of story, very little actually happens in this opening chapter of The Master Race but this simply follows the slow-burn approach that was a key part of the structure of The Dark Knight Returns.  Instead, readers are reintroduced to Miller’s world and his chosen cast of characters including the likes of Commissioner Yindel, Wonder Woman, Lara and a frozen (undoubtedly soon to be thawed out) Superman.  As with previous Dark Knight instalments there are a wealth of newscast talking heads delivering much of the exposition (as well as conveying commentary on the social and political lanscape) and the Batman’s appearances are kept largely in the shadows before pulling the rug from underneath the reader with a killer final page that will leave many reeling – and counting the days – until the next issue is published.

Much is relinquished to the visuals in this first issue and Andy Kubert’s pencils are the star of the show, enriched by the inks of Miller’s long-time collaborator, Klaus Janson.  Kubert refrains from wholly mimicking Miller’s style in favour of simply peppering his own with subtle hints of Miller-isms.  This is unmistakably the world Miller depicted in The Dark Knight Returns with Kubert delivering panel upon panel of intricate detail that together with Janson’s inks and Brad Anderson’s appropriately muted colours presents an epic, cinematic and nourish visual feast.

The Master Race is obviously Frank Miller’s idea but it’s through his collaboration with co-writer Brian Azzarello and penciller Andy Kubert that this eight issue series is likely to succeed where The Dark Knight Strikes Again failed, time will tell but this feels like it has the potential to be the “next” classic Batman story.

The bottom line:  The Master Race has a lot going for it, despite little narrative progression in this first issue there are hints of big things to come and Andy Kubert and Klaus Janson’s art is nothing short of sublime.

Dark Knight III: The Master Race #1 is published by DC Comics and is available in print and digital formats now. 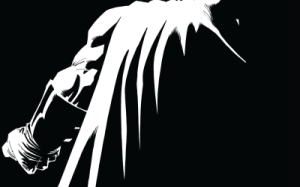