Please Note:  this review is deemed ‘spoiler-free’ on the basis that readers have seen the previously released full length trailers for Batman v Superman: Dawn of Justice.

Believing that the consequences of Superman’s actions may present a threat to humanity, Bruce Wayne shifts the focus of his war on crime as the Batman to facing off against the Man of Steel…

The “grudge match of the century” is finally here as Warner Brothers’ DC Comics superhero sequel Batman v Superman: Dawn of Justice comes thundering onto cinema screens.  Both continuing the story which began in Zack Snyder’s 2013 Superman reboot, Man of Steel and setting the stage for the larger canvas of the big screen DC Comics Extended Universe, BvS happily succeeds more often than it might fail.

With Snyder returning to the director’s seat and a screenplay written by Chris Terrio (Argo) and David S. Goyer (Batman Begins, Man of Steel), BvS picks up during the cataclysmic events at the climax of Man of Steel, the decimation of the city of Metropolis wrought by General Zod and Superman’s desperate efforts to stop him resulting in personal tragedy for Wayne Enterprises CEO Bruce Wayne.  Flash forward eighteen months and Wayne still grieves for the loss of his employees and becomes increasingly angered by the presence of an incredibly powerful being given liberty to act freely with no check in place.  Most see Superman as a heroic figure or a messiah but Wayne feels it’s time to reassess the Kryptonian Man of Steel’s place in the world and can only present a challenge as the Dark Knight of Gotham City.

Drawing heavily from Frank Miller’s seminal graphic novel The Dark Knight Returns, BvS carries a lot of narrative weight via it’s psychological examinations and philosophical debate and is arguably all the better for it.  Just as Frank Miller explored (and satirised) the political and social landscape of the 1980s, this film equally poses the questions that would present themselves in today’s climate of anti-terrorism and accountability.  There’s no doubt that Superman’s intentions are true but we see that there are consequences to his actions that affect others.  Likewise, Bruce Wayne’s methods as the dark vigilante known as Batman are also questionable as we’re left to ponder about how far is too far.

Ultimately, your enjoyment of BvS will equate to how you felt about Man of Steel, Zack Snyder as a filmmaker and dark, brooding – yet cerebral – superhero stories.  This is certainly a dark film, even in its few lighter moments and amongst the requisite and effects laden comic book action.  Similarly this is very much a Zack Snyder film in that BvS is not as intricately conceived and as masterfully executed as Christopher Nolan’s The Dark Knight but is non-the-less a well-constructed and visually impressive film.  There will be flaws should you look too deep yet with this in mind then in more instances than not it’s likely that your geek voice will prevail over any critical mumblings.  With some time taken to sow the seeds for next year’s DC heroes round-up in Justice League Part One there is a fair heft of mythology and a number of WTF?! moments (one sequence in particular) that, to a degree, become jumbled in the mix and might leave the more casual viewer (or at least those who are not as well versed in DC Comics lore) bewildered.  Similarly there are some narrative elements that feel they warrant further exploration or elaboration – hence the announcement that Warner’s home video release plans include an extended cut of the film.

Whilst there is some great depth to the story and themes of BvS, this is also a comic book film and Snyder bombards the senses with nerve jangling and explosive action sequences that some may find a little heavy and energetic, albeit not as overbearing as, say, Transformers: Age of Extinction.  The inevitable face-off between Batman and Superman is as exciting and cool as would be hoped for and although the climactic battle with the Doomsday creature might come off as a little ‘videogame-y’ it’s part and parcel of today’s blockbusters and facilitates sizeable stakes and a powerful threat to unite the central heroes.

Snyder and Warner Brothers assemble an enviable troupe of actors here.  Firstly, Henry Cavill slips comfortably back into the role of Clark Kent/Superman and together with Amy Adams’ Lois Lane pick up where they left off in Man of Steel, Jesse Eisenberg surprises as an enjoyably eccentric and psychotic Lex Luthor and Gal Gadot delights as Diana Prince/Wonder Woman (her triumphant entrance as the latter leaving no doubt that next summer’s solo outing is going to be a treat).  Yet their biggest casting coup, greeted with such controversy and trepidation, is Ben Affleck.  Affleck quickly allays any fears or doubts and proves to be the perfect choice for this iteration of Bruce Wayne/Batman.  As Wayne, Affleck exudes the right measure of assuredness and arrogance of his Playboy bachelor persona whilst effectively conveying the torture and continuing trauma of his parents’ murders and a dynamic range of humanity as he unloads both his fears and determination to his one true confidant and sounding board, Alfred (a reliably well-mannered Jeremy Irons).  Weary, cynical and tired of twenty years of fighting crime in Gotham City, Affleck proves to be adept in cranking up the intensity to present us with a Batman torn straight from the panels of The Dark Knight Returns, a shadowy, almost demonic figure striking fear into the hearts of criminals, often pushing himself to the edge to deliver a more brutal solution to the failings of ‘true’ justice.

When all is said and done, BvS unites the DC Comics ‘Trinity’ (and founding Justice League members) of Batman, Superman and Wonder Woman and provides a satisfying, epic and often thought provoking slice of comic book action that stands as a solid follow up to Man of Steel and a vital stepping stone in the burgeoning DC Comics film series.

The bottom line:  Dark and cerebral, epic and bombastic, please everyone it might not but for fans of comic book superheroes, Batman v Superman presents a solid next step in the DC Comics Extended Universe.

Batman v Superman: Dawn of Justice is in cinemas now.

This article contains light spoilers for season one of Daredevil as well as the first three episodes of season two (titled “Bang”, “Dogs to a Gunfight” and “New York’s Finest”).

The Marvel/Netflix Daredevil series has returned for its highly anticipated second season and based on the first three episodes it seems safe to say viewers (or at least those who haven’t already binged on the entire season by now) are in for another exhilarating ride.

Season two hits the ground running and wastes no time in neatly establishing the central characters (a skippable recap of key moments from the first season preceding episode one assists), their status quo and the escalating crime rate in the wake of Wilson Fisk’s fall from power.  The fledgling firm of Nelson and Murdock has no shortage of clients but very few who are able to pay legal bills with monetary currency, leaving the honourable and altruist lawyers with more fruit baskets and home baked pies than they can keep up with.  Matt continues his night time mission as protector of the innocent and vulnerable of New York’s Hell’s Kitchen and whilst Foggy has become more supportive of his best friend’s alter ego, he still bears a heavy dose of worry and concern and is becoming weary of covering up Murdock’s frequent absences and injuries to N&M’s faithful secretary, Karen Page.

It was great to see the growth of the ensemble of Charlie Cox, Elden Henson and Deborah Ann Woll and their respective characters throughout season one, the dramatic peaks and troughs of their relationships only making them stronger as a team, a family even.  Secrets are being kept from Karen only for her own protection but as the attraction between Matt and Karen continues to blossom there’s the potential for things to become even more complicated.

Charlie Cox slips back into the role of Matt Murdock/Daredevil with relative ease (as does Deborah Ann Woll as Karen Page) but we are also reminded that Elden Henson’s ‘Foggy’ Nelson is an essential component of the series.  Considering the character could have easily become mere comic foil, Henson and the writers have delivered a well-rounded and compelling character that has deserved moments in the spotlight, from gutsy verbal jousting with a rival lawyer, to diffusing potentially lethal situations, the latter facilitating the return of ‘Night Nurse’ Clare Temple (Rosario Dawson).

With a power void left by the now imprisoned Wilson Fisk leading to the resurgence of various criminal gangs, DD has his work cut out for him yet these problems only mount when another vigilante rises, one who has fewer morale boundaries…enter Marvel Comics anti-hero the Punisher!  Last seen onscreen in woeful 2008 film adaptation Punisher: War Zone, Marvel’s Netflix universe is the right place to reintroduce the character and The Walking Dead’s Jon Bernthal is, likewise, a perfect fit for the role.  This is a no holds-barred and no punches pulled interpretation of the character.  A man on the edge and a literal one man army with a zero tolerance for crime and Bernthal brings all of those qualities powerfully to the fore.

The writers of Daredevil have wisely made the Punisher part of this season’s story from the outset and collided Daredevil’s and Punisher’s worlds quickly, their initial confrontation having great consequences for Murdock and culminating in some welcome moral debate in episode three that echoes classic Garth Ennis story “The Choice”, adding narrative depth in between the visceral action (which includes a sequence to top that infamous hallway fight from season one).

With the rest of the Punisher’s story to unfold and the impending introduction of iconic Daredevil character Elektra and a heightened sense of Matt Murdock’s vulnerabilities, the signs all clearly point to this being another great season of Daredevil, every inch as compelling and exciting as its first.

All thirteen episodes of Daredevil season two are available to stream now worldwide exclusively on Netflix. 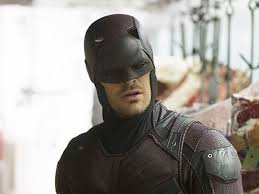 Charlie Cox makes an assured return as the ‘Devil of Hell’s Kitchen’ in season two of Marvel/Netflix’s ‘Daredevil’.