Wicked Men!  Ben Edlund’s zany superhero parody returns in another new iteration for Amazon’s pilot season and while it’s a little different from what fans of The Tick will be familiar with from the 1990s cartoon and the short-lived live action series from 2001 it’s a smart reinterpretation for modern audiences.  From the outset, it’s clear that for this newest take on The Tick Edlund has taken a darker, more mature (and even, to an extent, grounded) approach that mixes the adult themes and character deconstructions of the Netflix Daredevil series with the cartoon violence and madcap antics of Kick-Ass.

Unusually for a show called The Tick, Amazon’s pilot, at least initially, focuses mainly on his (eventual) sidekick, accountant Arthur Everest who thanks to a childhood trauma, revealed neatly via a series of flashbacks, suffers from mental health issues.  When Arthur discovers that purportedly deceased supervillain ‘the Terror’ (Watchmen’s Jackie Earle Haley) may actually be alive he becomes obsessive about uncovering the truth which soon leads to him crossing paths with the titular blue hero…who may or may not be a figment of Arthur’s imagination.  As Arthur, Griffin Newman provides a likeably dark, neurotic, yet rather funny protagonist that has real problems the audience can identify – or at least get on board – with that’s in tune with the pseudo-realism Edlund is going for with hints of the ‘hero’ he is to become.

Family Guy‘s Patrick Warburton (who serves as producer on this pilot) was pretty much a note perfect lead in the 2001 series, so what of Guardians of the Galaxy’s Peter Serafinowicz?  Well, he does a commendable job of succeeding Warburton and whilst he doesn’t quite have that hulking physicality he certainly has the voice (he was Darth Maul after all) and together with the wackiness of Edlund’s script we get a Tick that’s as zany and insanely verbose as ever, although the more intricately designed suit does at first take a little getting used to.

Visually this is a lavish and beautifully shot production (that boasts a cameo from Whoopi Goldberg no less!) on a scale that far surpasses that of the more confined, sitcom like feel of the 2001 series with The Dark Knight trilogy’s cinematographer Wally Pfister bringing an epic, film like quality to the 30-minute pilot.  Overall Amazon’s The Tick is a fresh but faithful reinterpretation for modern times that deserves the chance of going to series.

The bottom line:  Ben Edlund brings The Tick to Amazon Studios and their pilot is a darkly comic riff on the well-worn superhero genre that shows promise for a potential series.

The Tick is available to stream now, exclusively via Amazon.

What did you think of the Amazon’s pilot for ‘The Tick’?  Share your thoughts below! 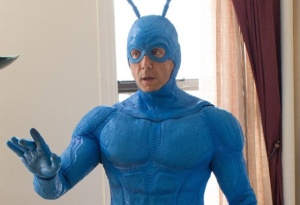 Peter Serafinowicz is ready to face those wicked men in Amazon’s pilot of ‘The Tick’.

Hunting for an escaped Joker, Batman finds himself in a race against time to rescue Commissioner Gordon form the clutches of the deranged Clown Prince of Crime…

Having already adapted Frank Miller’s seminal Batman: Year One and Batman: The Dark Knight Returns, it was always inevitable that Warner Brothers Animation would turn to tackling that other celebrated DC Comics work of the 1980s, writer Alan Moore and artist Brian Bolland’s The Killing Joke.  A dark and psychologically complex tale that’s equally unnerving, The Killing Joke adapted as an adult-rated animated feature would surely be a ready-made success?  Though enjoyable in many areas, Batman: The Killing Joke also proves flawed and never manages to hit the heights of the two-part adaptation of The Dark Knight Returns (which in all fairness is an entirely different story and set on a much larger scale).  The main issue lies with the source material, though Moore and Bolland’s graphic novel is an undisputed and flawless classic, it’s relatively short length would have resulted in too brief a running time had it been adapted ‘as is’.  As a result screenwriter (and fan favourite DC Comics scribe) Brian Azzarello has produced a wholly original 30-minute opening act focusing on Barbara Gordon/Batgirl that ultimately offers less to the overall story than it would hope to add.

There is a positive point to the opening act of The Killing Joke in that it provides Barbara Gordon with a larger role and resultantly a richer character arc in the story as Azzarello draws a complex and controversial relationship between Batman and Batgirl, set against her obsessive quest to bring down gangster Paris Franz (Maury Sterling).  It certainly helps the viewer to establish a deeper connection with Barbara adding some emotional weight to events later on yet it’s the almost jarring transition from this new material to the familiar where things falter, as nothing from the Franz sub-plot and very little from the Batman/Batgirl dynamic carries over into the rest of the film.  It’s appreciated that this would cause further deviation from Moore and Bolland’s original story and thus might have resulted in a messier final product but it’s a shame that even a small attempt to tie the two elements together couldn’t have been made.

The opening Batgirl story aside, the actual adaptation of The Killing Joke works relatively well.  It’s pleasingly faithful, the adult rating ensuring that director Sam Liu is able to depict every gut twisting moment uncensored, with some beautiful animation work utilising a style that sits somewhere between the realistic look of the Batman: Year One (also helmed by Liu) adaptation and the slightly more caricature visuals of The Dark Knight Returns.  Wisely, some of Brian Bolland’s most memorable and evocative panels are replicated perfectly at several key moments in the film which will give many a reason to pull out their copies of the graphic novel.

Of course, one of the greatest joys of The Killing Joke is that it features the return of Kevin Conroy and Mark Hamill in their respective and much loved Batman: The Animated Series roles as Bruce Wayne/Batman and the Joker.  They’re as great as they’ve ever been, Hamill in particular as he deftly straddles a fine line between serious and outright manic, his evermore gravelly tones delivering a reliably unsettling yet still silly Joker (aided by an odd but nifty musical number).  Tara Strong also reprises her Batgirl role from The New Batman Adventures and makes a decent job of conveying the more layered approach to the character featured here, whereas Robocop’s Ray Wise is a little flat as Commissioner Gordon which is slightly disappointing given what happens to him in the story.

Sweetening the deal are a number of nice little easter eggs for fans to lap up including visual references to Jokers from Tim Burton’s Batman and Christopher Nolan’s The Dark Knight (both of which were heavily influenced by The Killing Joke) and a twist on that iconic cover image from Detective Comics #27.

Despite some positive points, there’s an overriding sense that the animated adaptation of The Killing Joke comes off feeling a little slight and at times lacking the impact of the graphic novel (especially in the often dissected and endlessly debated finale) and the additional material would have arguably been better served expanded into its own feature.  Still, with Conroy and Hamill on hand and some striking visuals and a respectful adherence to the work by Alan Moore and Brian Bolland there’s still enough reason for fans to check out this latest DC Comics venture from Warner Brothers Animation.

The bottom line:  Though flawed, the animated adaptation of The Killing Joke still makes for an enjoyable watch that will ultimately lead fans yearning to revisit Alan Moore and Brian Bolland’s original graphic novel.

Batman: The Killing Joke is available on Blu-ray, DVD and digital download now.