Written by:  Tom King / pencils and inks by:  Jason Fabok

“The Button” Part One : Batman enlists the Flash to aid in his investigation into the mysterious smiley button found in the wall of the Batcave…

Almost a year on from DC’s relaunch initiative under the now iconic (and for the most part creatively successful) Rebirth banner, one of its most tantalising mysteries is about to be explored in “The Button”, a four part crossover playing out across Batman and The Flash.

For this opening chapter, writer Tom King takes a simple and steady approach to a slowly unfolding narrative that spends a chunk of its page count depicting a violent brawl between Batman and a returning villain long thought dead.  If this sounds like a criticism, it isn’t, as Tom King masterfully eases the reader in to a story that answers little about those lingering threads from Geoff Johns’ triumphant DC Universe Rebirth #1 but manages to remain non-the-less intriguing whilst setting the stage for what’s to come.  If there’s any concern at this point it’s that four issues may not be long enough for this particular arc, given the potential ramifications it may have for the overall DCU.

As regular DC Comics readers will know, DC Universe Rebirth #1 established a startling and enigmatic connection to Alan Moore and Dave Gibbons’ seminal masterwork Watchmen, the discovery of a certain blood-stained yellow smiley button embedded in the Batcave wall leaving the Dark Knight Detective with the promise of the most challenging investigation he’s likely ever to face.

Tom King (whose run on Batman is only getting stronger) makes good work out of a minimal narrative, throwing in a few shocks and surprises that help hold the reader’s interest through to a feverishly good cliffhanger.  King realises that the strengths of Batman #21 lie in its visuals – so thank the stars Jason Fabok is on hand to provide the art here.  Fabok has been sorely underutilised since Geoff Johns’ pre-Rebirth run on Justice League wrapped and it’s a real treat to see his meticulous, powerful and lavish layouts on show (Howard Porter will certainly need to up his game for The Flash issues), particularly during those pages in which Batman fights for survival against his opponent, whilst the Flash speeds his way through a fight of his own (King proving he has a good handle on the Scarlet Speedster in these moments as he dashes and quips his way through the action) before racing to the Batcave and into the heart of this mystery.

To say too much specific about Batman #21 would spoil the fun but it’s rewarding to see this story have ties to not only the DC Universe Rebirth special but also to DC’s earlier continuity twisting and New 52 birthing event, Flashpoint and of course, Watchmen, which King and Fabok pay homage to with some nifty panel construction that’s pleasingly reminiscent of that classic piece of work.  Although it may seem there’s little narrative progression in Batman #21, it’s via these connections that it actually offers far more than casual readers will appreciate but still provides enough visual thrills to keep any comics fan happy.

The bottom line:  Tom King delivers an intriguing and surprising opening to “The Button”, made all the more enjoyable by the exciting visuals of the stellar Jason Fabok.

Batman #21 is published by DC Comics and is available in print and digital formats now. 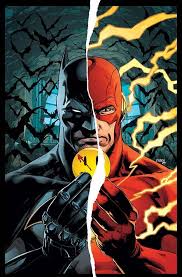