Under attack by a ruthless colonel and his army, Ape leader Caesar embarks on a journey to bring an end to the bloodshed once and for all…

Picking up two years after the close of Dawn of the Planet of the Apes, war with humankind has driven Ape leader Caesar into hiding as he attempts to protect and ensure the future of his fellow apes against the brutal attacks of a rogue army platoon lead by the unsavoury Colonel McCullough (Woody Harrelson), a particularly devastating battle pitting the two leaders against one another as Caesar sets out in pursuit of his enemy in a journey that will see him once again forced to fight for the freedom of his people.

There are further leaps in CGI here that further blurs the line between the real and artificial yet it’s the efforts of the performance-capture artists and returning Dawn director/co-writer (with Mark Bomback) Matt Reeves that really sells it, allowing the audience to become invested and care about the simian society and their struggle for survival.  As Caesar, Andy Serkis brings the experience of his craft fully to bear that, coupled with ground-breaking technology and Reeve’s intricate direction, delivers a powerful and emotive performance that drives the heart and soul of War for the Planet of the Apes.

Serkis is brilliantly supported by returning performance-capture co-stars Terry Notary (as Rocket), Karin Konoval (as Maurice) and Michael Adamthwaite (as Luca) but it’s the addition of new simian character ‘Bad Ape’ that’s a true highlight with Steve Zahn bringing a sympathetic edge to the kooky comic relief that’s a real joy to watch.  There’s also a wonderful dose of heart provided by Amiah Miller, who plays a young mute human girl befriended by Maurice and who Caesar reluctantly allows to join his quest against McCullough.  Along with Bad Ape, she becomes integral to the group and another great addition to the line-up of strong, well-written characters.  As the main antagonist, Woody Harrelson is a real coup bringing a steely eyed quality and cruel malevolence to the role of the Colonel, a character not without his own personal tragedy that helps to paint an unhinged but complex man of war.

As with Dawn of the Planet of the Apes, Matt Reeves (who has been tasked to take on The Batman) demonstrates an incredible talent for world-building, effortlessly marrying epic landscapes with thrilling action sequences and quieter character-centric moments that draws the viewer into a world that feels far more real than the average franchise blockbuster.  It’s all bolstered by a screenplay that’s layered and constructed with intelligence, accentuating the war film elements with shades of Apocalypse Now and The Great Escape and replete with callbacks to the original Apes series that will further please fans of the classic science-fiction saga.

The bottom line:  A stirring and visually impressive blockbuster with brains, War for the Planet of the Apes is another fine entry in the series.

War for the Planet of the Apes is in cinemas now. 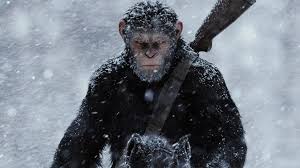 Weathering the storm: Caesar (Andy Serkis) continues the fight for survival in ‘War for the Planet of the Apes’, from 20th Century Fox.

Tom Holland swings back into action to grapple with great power

Having fought alongside the Avengers as Spider-Man, Peter Parker yearns to be the indispensable hero but finds he has much to learn when the appearance of the villainous Vulture threatens to destroy all that he loves…

After making an impressive debut in Captain: America Civil War, Tom Holland returns to the Marvel Cinematic Universe as high school student Peter Parker – aka Marvel’s much-loved wall-crawling web-head, Spider-Man.  The sixth solo big screen outing for the character, Spider-Man: Homecoming benefits greatly from the co-production deal between Sony Pictures and Marvel Studios with its connections to the wider Marvel screen universe more of an embellishment than a hindrance.

Whilst it fails to match the heights of Sam Raimi’s Spider-Man 2, Homecoming is a fun, witty and heartfelt comic book adventure, wearing its high school teen comedy and coming of age story elements with pride and exuberance.  In this respect, Spider-Man: Homecoming is a more youthful affair in the vein of John Hughes’ The Breakfast Club and Ferris Bueller’s Day Off, focusing on its characters first and foremost, offset by the (generally) more street-level heroics of Peter Parker’s friendly neighbourhood alter-ego rather than being a slave to it.

Tom Holland once again tackles the role of Peter Parker/Spider-Man with enthusiasm and glee, with the wit, intelligence and vulnerability that reminds us of the appeals and relatability of the character – the well-intentioned, nerdy underdog with everyday problems that everyone loves to root for.  In an age where to be a geek is somewhat cooler than in the 1960s, Homecoming treats Parker as less of an outsider and has a more balanced approach to its laudably diverse, multicultural cast of characters with some contemporary twists on familiar faces.  As the object of Peter’s affections, Liz (Laura Harrier) is more of a peer than the totally out-of-reach popular ‘cool’ girl but there’s still a good dose of angst as Peter tries to balance his school life and the callings of a superhero.

This being a Spider-Man film, there’s a natural wealth of humour (largely facilitated by Peter’s best friend, Ned – played wonderfully by Jacob Batalan) that, like Guardians of the Galaxy and Ant-Man fits neatly into the world of Peter Parker and never feels out of place or forced in at the wrong moment (Doctor Strange, ahem).  There are also numerous references and connections to the MCU (including the return of Tony Stark’s cantankerous driver, ‘Happy’ Hogan – with Iron Man/Iron Man 2 director Jon Favreau reprising his role) but are all slotted in tidily without burdening the story – this is still very much Spider-Man’s film.

As the central villain, Michael Keaton brings experience and gravitas to the role of Adrian Toomes/Vulture and despite having less screen time than it would initially seem he is well-served by some decent writing which paints a more interesting antagonist with identifiable motivations.  Far less a mere marketing gimmick, Robert Downey Jr’s part as Tony Stark/Iron Man feels integral to the narrative as he plays an important role as a father/mentor figure, there to guide Peter’s course and help him correct the errors of his ways – Stan Lee’s classic moral principal concerning great power and great responsibility a driving theme throughout.  It’s the support from Stark and Peter’s Aunt May (Marisa Tomei) that help keep our struggling hero centred and inspired to do better and be greater.

Although Spider-Man: Homecoming is mostly concerned with its characters, and the high school focused portions do tend to drag out the pace at times, there’s still plenty of popcorn action and spectacle to be had.  Despite the bulk of the action being bound to the streets of New York, there are a few larger set-pieces with ferry rescue and endangered aircraft sequences amongst the highlights.  It’s all staged competently by director Jon Watts and though lacking a little of the overall heft and excitement of the previous efforts by Sam Raimi and Marc Webb, it delivers enough to keep the audience engaged and thrilled.

Whilst the coming of age story and teenage relationship scenarios might be more appealing to a younger demographic, more seasoned Spider-Man fans will appreciate that this is where Peter Parker’s story begins, the formative experiences of his earlier years an important part of the character’s makeup and just like in the comics we can only look forward to seeing the character learn and grow into adulthood…the amazing and spectacular Spider-Man is here to stay and it’ll be exciting to share his cinematic journey in the years to come.

The bottom line:  A highly enjoyable romp, Spider-Man: Homecoming sets the iconic web-slinger on course for greater adventures to come as part of the Marvel Cinematic Universe.

Spider-Man: Homecoming is in cinemas now. 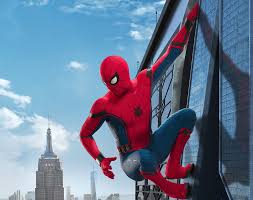 Does whatever a spider can: Tom Holland stars in ‘Spider-Man: Homecoming’ from Sony Pictures and Marvel Studios.