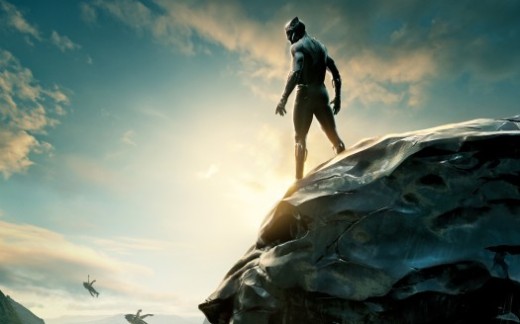 Following the death of his father, T’Challa returns to Wakanda to be crowned king and continue to serve as the secretive nation’s legendary protector – the Black Panther, but soon faces a threat to his beloved society that could have dire consequences for the rest of the world…

A triumph for representation and cultural celebration, Black Panther is the highly anticipated Marvel Studios release focusing on the titular Marvel Comics character who debuted in the pages of Fantastic Four #52 published back in 1966.

After a memorable introduction in 2016’s Captain America: Civil War, Chadwick Boseman reprises the role of T’Challa – heir to the throne of the fictional African nation of Wakanda, a place of true marvel and beauty that thrives on its proud traditions, spirituality and incredible technological advancements derived from their source of ‘vibranium’ – the strongest metal ever known to mankind, its potential for exploitation by the wrong people forcing the society to remain largely hidden and isolated from the rest of the world.  Boseman tackles his role with a quiet strength, deftly conveying key qualities of nobility and leadership with dignity and grace, embodying the spirit of the character created Stan Lee and Jack Kirby over fifty years ago.  What’s appealing about T’Challa and the Black Panther comics in general is the fact that he’s not just a “superhero” but also a leader and a diplomat and thankfully this film grabs firmly on to those elements, melding them with a story that mixes Bond-esque espionage and intrigue with a deeper focus on all too relevant social issues (and doesn’t shy away from them without being overly preachy) together with the action and spectacle that’s part and parcel of any comic book blockbuster.

Creed director Ryan Coogler (who also co-writes) presents a visually captivating film, whether it be the gleaming, computer generated towers of the Wakandan city or the magnificent, sumptuous African vistas that, with the command of an appreciably sized budget delivers it all on an epic scale.  Black Panther does at times find itself falling victim to the more rigid and predictable elements of the well-worn formula of a Marvel Studios production and its slightly overblown CGI soaked finale, though exciting enough, feels a little at odds with the deeper, more cerebral aspects of the film.  Luckily Black Panther takes itself more seriously than other recent Marvel efforts, that’s not to say it doesn’t take time to have fun with itself but at least the humour here is largely more restrained and natural than, bar one or two moments, forced and unnecessary.  It’s arguable that Black Panther would’ve benefitted from some tighter and more consistent pacing but it remains entertaining on the whole.

For certain, the main strengths of Black Panther lay in its superb casting (coupled with well-drawn characters) and Ryan Coogler has assembled an impressive set of players.  Boseman is of course the commendable lead but is equally matched by those surrounding him, Letitia Wright is wonderfully energetic as T’Challa’s genius, playful sister Shuri, Danai Gurira is powerful and assured as General Okoye, leader of the Wakandan Royal Guard and Star Wars actress Lupita Nyong’o brings warmth and humanity to the role of Nakia.  There are smaller roles for Forest Whitaker and Angela Bassett that may have warranted more attention but their parts are still relatively significant.  Also returning from Civil War is Martin Freeman, continuing in the role of CIA Agent Everett Ross and being the only real tie to the rest of the Marvel Cinematic Universe.  Standing out overall though is Coogler’s leading man from Creed, Michael B. Jordan as central antagonist – in cahoots with arms dealer Ulysses Klaue (the always excellent Andy Serkis, last seen in Avengers: Age of Ultron) – Erik “Killmonger” Stevens, an exiled terror-maker who proves to be one of the stronger, more dimensional Marvel villains thanks to some decent writing and a weighty, venomous performance from Jordan he’s a character we don’t want to side with but there are credible reasons we could sympathise with him.

So, despite some formulaic elements, through its casting, direction and overall design, Black Panther still has its own flavour and some unique qualities, opening up another corner of the MCU and setting the stage for its future as we move towards the release of Avengers: Infinity War.

The bottom line:  Aside from the occasional stumble, Black Panther is a beautifully designed, well-cast and enjoyable blockbuster with some depth and is another worthy addition to Marvel’s big screen pantheon.

Black Panther is in cinemas now.