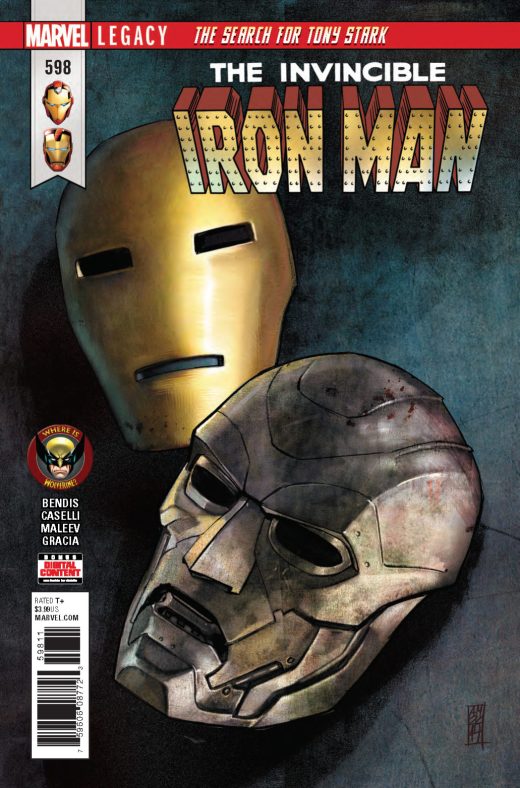 “The Search for Tony Stark” Part Six : as the Avengers try to locate Tony Stark and Victor Von Doom finds himself in a tight corner, Riri Williams heads to M.I.T. to continue her own search for the former Iron Man…

Brian Michael Bendis delivers touches of intrigue, drama and action in the latest instalment of his final Iron Man story before departing for rival publisher DC.  Commencing his tenure during Marvel’s ‘All-New, All-Different’ relaunch back in 2015, Brian Michael Bendis has given readers a decent run on The Invincible Iron Man (as well as enjoyable limited-run spin-offs International Iron Man and Infamous Iron Man).  It’s fair to say that the title has been slow at times but never short of an entertaining read, whether it has concerned the adventures of Tony Stark or his post-Civil War II successor, Riri Williams – a.k.a. ‘Ironheart’.

“The Search for Tony Stark” steps towards its impending conclusion (in issue #600) and whilst there’s isn’t a great deal of progression in actual plot and the ‘search’ itself not quite as engrossing as one would hope (the story will likely read better once collected), Bendis takes time to focus on his main players, Riri Williams/Ironheart and Victor Von Doom/’Infamous’ Iron Man with a couple of brief appearances from the likes of Captain America (literally for one page) and Blade.  It’s good to see Blade pop up and his instant rapport with Riri helps restore her drive after having the Ironheart armour confiscated.  It remains to be seen if Bendis has more use for Blade but as is, it’s a neat little cameo that has some narrative importance.

Meanwhile, Victor Von Doom continues to have a rough time of it – now faced with the Hood and his rag tag crew of villians, out to strip the former ruler of Latveria of all that’s left of his worth.  It’s hard to imagine that Marvel will want to maintain Von Doom’s hero/anti-hero status for much longer but Brian Michael Bendis has added numerous layers to the character and in the process made Victor Von Doom all the more interesting which, in turn, will make him all the more compelling as a villain should Marvel choose to take that path.

Whilst it’s a hefty dose of gloom for Victor, Riri is back to her bright and optimistic self as she is reunited with her armour and along with fellow Iron compatriots Arno Stark, Tony Ho and Madison Jeffries press forward in the quest to locate Stark…and run into some familiar foes along the way (with a twist).  It’s fun and enjoyable stuff that’s a perfect contrast with the bleaker proceedings that Von Doom faces.

Art is once again divided between Stefano Caselli, handling Riri Williams’ sections of the story and Alex Maleev presenting the Von Doom portions.  As with previous issues it works extremely well, Caselli bringing an energetic, slightly cartoonish style to Riri’s world (punched up with the help of Marte Garcia’s colours) and Alex Maleev delivering moody and gritty visuals that befit the darker tone of the ‘Iron Doom’ segments.

The bottom line:  “The Search for Tony Stark” continues slowly but Brian Michael Bendis still delivers strong character work and together with the beautiful art, The Invincible Iron Man remains a solid read.

The Invincible Iron Man #598 is published by Marvel Comics and is available in print and digital formats now.