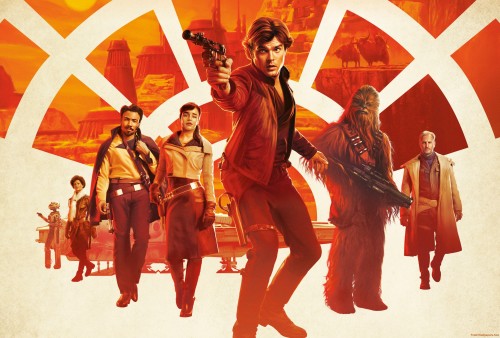 Alden Ehrenreich leads the cast of Lucasfilm’s ‘Solo: A Star Wars Story’  (image used for illustrative purposes only and remains the property of the copyright owner).

Dreaming of becoming the greatest pilot in the galaxy, Han Solo embarks on an adventure where he meets his future co-pilot Chewbacca and is pitted against Lando Calrissian as he seeks to obtain his prized ship, the Millennium Falcon for use in a daring intergalactic heist…

Following all of the behind the scenes drama surrounding the exit of original directors Phil Lord and Christopher Miller and extensive reshoots implemented by Lucasfilm with the hiring of Ron Howard, it’s fair to say expectations were somewhat soured for this latest standalone Star Wars story chronicling the early adventures of a young Han Solo.  A film that many a Star Wars fan would argue they never even wanted in the first place, Solo rises from the ashes of those initial issues of its troubled production and via the talents of director Howard, a surprisingly witty and charming lead and scintillating visuals proves to be an enjoyable addition to the Star Wars cinematic canon.

Opening on the crime ridden streets of the planet Corellia, Solo introduces us to a younger version of the iconic scoundrel some years before his fateful encounter with Luke Skywalker and Obi Wan Kenobi in A New Hope (aka 1977’s original Star Wars) as he attempts to escape to a better life with girlfriend Qi’ra (Game of Thrones’ Emilia Clarke).  Events taking a bad turn, Solo soon finds himself disillusioned and without cause as he fights for the tyrannical Galactic Empire – but the future hero of the Rebel Alliance gets another chance as he joins the devious Tobias Beckett (Woody Harrelson) and his ragtag group of outlaws (amongst them Westworld’s Thandie Newton as Beckett’s wife, Val) on a raid to steal a valuable fuel source and deliver it to the Crimson Dawn crime syndicate.

With Harrison Ford so universally adored as one of the most beloved Star Wars characters – one who is a cinematic icon, regardless – fears of anyone else stepping into the role would not be unfounded.  Rest assured that Alden Ehrenreich (Hail, Caesar!) is a worthy successor and a great fit for the part, charismatically conveying the swaggering mannerisms and cocky attitude (ably assisted by the writing from veteran Star Wars scribe Lawrence Kasdan and his son, Jonathan) without coming off as a mere imitation of Ford’s take on the loveable rogue, more of an embodiment than an impersonation and much like Chris Pine in J.J. Abrams’ Star Trek is afforded some latitude to add his own mark without betraying the essence of such a memorable character.  Emilia Clarke is fine enough as Qi’ra (but certainly no Carrie Fisher) but Ehrenreich is at his best when playing off against new pals Chewbacca (Joonas Suotamo) and Lando Calrissian (The Martian’s Donald Glover similarly channelling original actor Billy Dee Williams whilst equally making the part his own).  The ever reliable Woody Harrelson makes an impression as Beckett and shares some great moments with Ehrenreich but it’s a part that’s maybe not as fully realised as it could’ve been.  Paul Bettany (Avengers: Infinty War) is another high point in the role of Crimson Dawn’s leader Dryden Voss, which the actor tackles with some glorious scenery chewing might.

Jon Favreau (director of Marvel hits Iron Man and Iron Man 2, also appointed to oversee the forthcoming live action Star Wars television series) adds to the fun as the voice of Beckett’s pilot, CGI character Rio but it’s the motion capture performance of Phoebe Waller-Bridge as Lando’s faithful droid companion L3-37 that stands out, although admittedly filling the void left by Alan Tudyk’s K2-SO in Rogue One, Waller-Bridge is similarly wonderful as L3 and delivers some genuine laughs…and even a little bit of heart.

Overall, the plot manages to maintain momentum and delivers an almost continuous string of excitement in a fun and visually striking adventure.  Where Solo does falter however is in some of its predictability borne out of the demands of being an origin story, whilst it can (together with the numerous nods to the history of the franchise) often enrich the experience for Star Wars fans, the potential scope of the narrative is restrained a little by the need to check off certain items as well as a couple of surprisingly unsurprising twists.  There’s also not a huge deal of development to the character of Han Solo beyond what we already know but that’s arguably down to the placing of the film in the Star Wars timeline.

Those flaws notwithstanding, Solo is never less than a highly entertaining space adventure and is bolstered by quality production values and epic visuals that only enhance its action sequences, which includes a gripping mountain top train heist but the highlight undoubtedly being the infamous Kessel run as Han and Chewie take control of the Millennium Falcon for the first time – John Powell’s score effectively evoking a sense of nostalgia as he employs those classic John Williams themes that are so intrinsically connected to the Star Wars mythos.

Solo is by no means the greatest Star Wars film but it’s a pleasingly solid and fun ride that may even serve as a palette cleanser for those who were not so enamoured by Rian Johnson’s The Last Jedi.

Solo: A Star Wars Story is in cinemas now.