Sony Pictures launch a Marvel universe of their own… 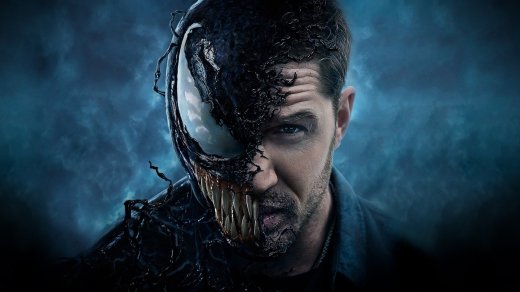 Infected by an intelligent alien parasite, former journalist Eddie Brock succumbs to the yearnings of the creature to become ‘Venom’ in a symbiosis that will ultimately benefit both…

Released to scathing critical reviews, Sony Pictures’ Venom is actually a fun popcorn flick that’s not nearly as awful as those opinions would have you believe.  It’s not the greatest comic book film adaptation you’ll ever see but much like Warner Bros/DC’s Suicide Squad, Venom manages to hold itself together and navigate its flaws to simply entertain, viewed with the right mind-set.

Seen as the launch pad for Sony’s Spider-Man spin-off cinematic universe (the rights to the iconic web-slinger currently being shared with Marvel Studios), Venom sees star journalist Eddy Brock (Tom Hardy), having lost his job and his fiancée, becoming bonded with an alien ‘symbiote’ allowing him to transform into ‘Venom’ – the popular Marvel Comics anti-hero (originally established as one of Spider-Man’s most lethal foes) created by Todd McFarlane and David Michelinie.  Previously brought to the bring screen in Sam Raimi’s Spider-Man 3, Venom’s Spidey-less origin is likely to be the most controversial element of this new adaptation.

The ever reliable Tom Hardy (who was a powerful and imposing presence in The Dark Knight Rises) is Venom’s biggest asset with a committed and kooky performance that walks (and sometimes hops over) a delicate line between dramatic and darkly comedic.  Like the tone of the film itself, it comes across as a little odd and unsure at first but Hardy somehow makes it work and once Venom comes into play (whether as a voice in Brock’s head or in fully formed symbiosis with his host) the lead star clearly begins to have fun with it all.  In fact, it’s the ‘relationship’ between Brock and Venom that’s the most enjoyable aspect of the film.

Rogue One’s (and another of Britain’s own) Riz Ahmed brings a decent amount of menace to the central villain, Carlton Drake – entrepreneurial head of the Life Foundation, whose latest space mission brings Venom and other fellow symbiotes to Earth and Michelle Williams does well enough in an otherwise thankless role as Brock’s former girlfriend, Anne Weying.  The rest of the supporting cast and ancillary characters (including Jenny Slate as a Life Foundation scientist) are less noteworthy but serve their parts non-the-less.

The CGI is fine for a film of this level of budget (around $100 million) but the script can be a bit drab (and a little problematic as it tries to deliver tonal cohesion) with some generic characterisation and occasionally silly dialogue yet it provides and despite a slow-burn opening act, Venom soon begins to move along at an entertaining pace.  Ruben Fleischer’s direction does the job although the action scenes can be a bit muddled, falling into the trap of nauseously fast camera movements and quick edits.  It makes for a somewhat jumbled climax as Venom faces off against the rival symbiote known as ‘Riot’.

In the end, Venom feels like an old school comic book film that pays homage to those early McFarlane/Michelinie stories and coupled with Tom Hardy’s portrayal there’s enough to have a good time with.  It’s not a perfect start but there may actually be potential for these Sony produced Marvel outings after all.

The bottom line:  Not without its drawbacks, Venom turns out to be a fun and undemanding slice of comic book action that’s worth checking out.

Venom is in cinemas now.

What did you think of ‘Venom’? Share your thoughts in the comments section below!