The newest ‘Star Trek’ crew embark on a new adventure… 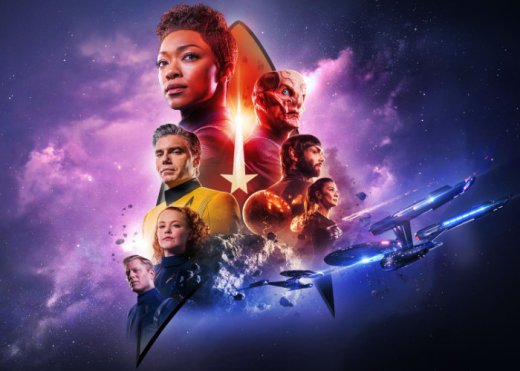 The crew of the U.S.S. Discovery are ready to begin their next voyage as season 2 of ‘Star Trek: Discovery’ begins (image credit: CBS, used for illustrative purposes only).

“Brother” : Captain Christopher Pike takes command of the Discovery with orders to investigate a mysterious and dangerous cosmic phenomenon…

Star Trek: Discovery returns to screens with an intriguing and highly promising start to it’s second season. Following on from those enticing final frames of the season 1 finale, “Brother” picks up right where things left off with Discovery responding to an emergency distress call from the U.S.S. Enterprise. Viewers are thrust right into the excitement as Enterprise captain Christopher Pike (Anson Mount) boards the Discovery to take command in order to investigate a series of mysterious red bursts which have appeared throughout space and resulted in catastrophic systems failures aboard the Enterprise. The investigation ultimately leads to the stricken U.S.S. Hiawatha (where we meet Tig Notaro’s wonderfully dry Chief Engineer Reno), grounded deep within a chaotic asteroid belt and Lt. Commander Michael Burnham’s encounter with a strange vision of a red angel-like figure that may have some connection with the red burst phenomenon.

There’s an awful lot established here – the introduction of a new lead character for the season (Pike, of course), the set-up of the ‘Red Angel’ mystery, the post-war status-quo for the crew of Discovery and further exploration of Burnham’s back-story, her upbringing on Vulcan and her seemingly uneasy relationship with her adoptive brother, Spock. Thankfully (and aided by an extended running time for this episode) it never feels rushed or unfocused and enough time is taken to provide a reasonable amount of overall interest and anticipation for the story arc that lies ahead.

As Captain Pike, Anson Mount is a great addition to the series and much like Bruce Greenwood in J.J. Abrams’ Star Trek and Star Trek Into Darkness makes his own mark on the character originally played by the late Jeffrey Hunter in “The Cage” – Star Trek’s original pilot episode. Mount is instantly likeable in the role, confident, authoritative but personable and engaging, he has an immediate rapport with the crew of Discovery and the writers take steps to address the distrust they may have after being betrayed by their former commander (Jason Isaac’s Gabriel Lorca). Mount is sure to be a highlight going forward.

Whilst Mount certainly makes an impression, Sonequa Martin-Green continues to be the central focal point of Star Trek: Discovery and she doesn’t disappoint and delivers on the solid material she is given. An opening voiceover reiterates Burnham’s renewed sense of faith in herself and her place in Starfleet whilst flashbacks to Burnham’s Vulcan childhood and her interactions with Sarek (James Frain) in the present add emotional value. The flashbacks also facilitate a glimpse of a young Spock, preparing viewers for the impending introduction of Ethan Peck as the adult version (who is heard, via voiceover, but as yet unseen) which is bound to stir matters up dramatically.

Whilst Martin-Green’s Burnham is undoubtedly the narrative focus of Discovery, Mary Wiseman’s Ensign Tilly is once again the heart of the series and the character who most exemplifies the positive values of Starfleet and the Federation – her wide-eyed, child-like enthusiasm balanced by an innate kindness and endearing humanity. Wiseman also has a lot of fun with the role and there’s some great interplay between her and her co-stars – particularly her friendship with Burnham – and the fumbling star-struck moment Tilly has with Pike is priceless. The ever-impressive Doug Jones makes an assured return as Saru and although there is less for him to do in this episode, he still has a presence and applies the same level of skill and passion he demonstrated during the first season. Anthony Rapp brings a similar level of commitment as Stamets, with a slightly more sombre and reflective twist as he mourns the loss of his partner, Dr. Culber (Wilson Cruz – able to participate via holographic messages) and announces his plans to leave Starfleet once Discovery’s current mission has been completed. This leads to some sweet moments between Stamets and Tilly that accentuate the building feeling of family amongst the crew, always an important part of any iteration of Star Trek.

The visuals of Star Trek: Discovery are again hugely impressive with epic, feature film quality production values – in fact there are moments where you’d be forgiven for thinking you were watching J.J. Abrams’ Star Trek (2009), especially during Discovery’s tense navigation of an asteroid field and an edge-of-the-seat space-pod set-piece as Pike and Burnham attempt to reach the Hiawatha. It’s all handled superbly under the direction of series co-creator and executive producer Alex Kurtzman.

Now that the Klingon War and Mirror Universe storylines have concluded, Star Trek: Discovery is free to chart a lighter and more hopeful course and that’s clearly intended from the outset. That’s not to devalue season 1, and those darker narratives provided gripping drama and helped define and galvanise the crew but it will be a welcome fresh direction for the series as it ties further into Gene Roddenberry’s vision of a positive future for humanity whilst continuing to tell stories about the issues of the day through the prism of compelling science fiction and identifiable characters.

With CBS’ plans to expand the franchise – from the hotly anticipated Jean-Luc Picard series, to the forthcoming animated comedy from the creators of Rick & Morty and the recently announced Discovery spin-off that will focus on the Mirror U Philippa Georgiou and the clandestine Section 31 organisation, despite the lack of movement on a fourth J.J. Abrams produced film it’s a great time to be a Star Trek fan.

The bottom line: The second season of Star Trek: Discovery launches confidently with a highly promising premiere with impressive visuals, strong characterisation and a tantalising mystery at its centre.

New episodes of Star Trek: Discovery are released Thursdays via CBS All Access in the U.S. and available to stream internationally every Friday on Netflix.