“If it bleeds, we can kill it” 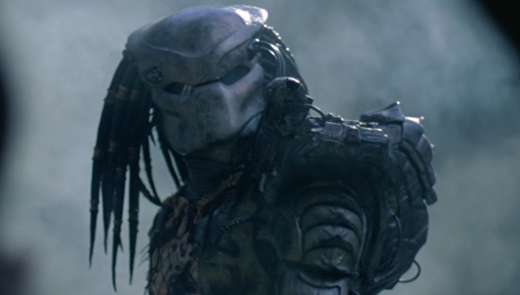 An adrenaline induced and suspenseful science fiction actioner, Predator is the first – and indisputably best – entry in what would become 20th Century Fox’s other iconic SF creature franchise.  With a cast lead by action megastar Arnold Schwarzenegger and directed by John McTiernan (who would helm another classic the following year – Die Hard), Predator is highly entertaining.

The set-up is simple: a crack military team are sent into the guerrilla-infested jungles of Central America on a mission to rescue the crew of a downed helicopter.  Discovering the skinned bodies of their comrades, the team soon find themselves in a fight for survival as an alien creature, which collects the skulls of its victims as trophies, begins hunting them down.  The execution is superb, writers Jim & John Thomas, together with the cast, provide a troupe of tough but likeable characters:  team leader ‘Dutch’ is played assuredly by Schwarzenegger (quickly reaching the height of his superstardom at this point), ably supported by Carl Weathers as Dillon, a former colleague turned-CIA man with the roster filled out by Bill Duke as ‘Mac’, Jesse Ventura as Blaine, the late Sonny Landham as Billy, Richard Chaves as Poncho and Shane Black – future writer and director of 2018’s The Predator (and who also provided uncredited contributions to the script for Predator) stars as Hawkins.  Caught up in the terror is Elpidia Carrillo as Anna, a captured guerrilla who joins Dutch and his unit as they attempt to reach extraction.

John McTiernan directs with confidence and skill, delivering scintillating and satisfying action.  Yet it’s the slowly unwinding element of suspense that makes Predator so engrossing, like Ridley Scott’s Alien, time is taken for events to unfold creating an increasing sense of unease.  The unrelenting heat of the jungle coupled with the conflict fermented by the interference of Weathers’ Dillon adds further to the tension.

Of course, Predator is nothing without its central threat and the Predator itself – created by the legendary Stan Winston and his studio (saving the production after a failed, laughably bad and unconvincing prototype was abandoned) – is as unique and memorable as the Xenomorphs of Alien and Aliens, remaining incredibly formidable and one of the greatest and most iconic creature designs in the history of film.  Just as Predator unfolds at a steady pace, the appearance of the lethal 7 foot-plus and muscular extra-terrestrial (played by Kevin Peter Hall), masked and equipped with an invisibility cloak, shoulder laser, razor sharp gauntlet blades and heat vision sensor is slowly revealed – the final unmasking saved until its climactic one on one showdown with Dutch in an exciting and rewarding finale.

Alan Silvestri’s thrumming, atmospheric and intense music score proves the perfect accompaniment to a true genre classic that would spawn numerous sequels, comic books, novels, video games and slews of merchandise that add up to a pop culture phenomenon.

After storming the guerrilla camp, Dutch and his team prepare to depart and head for extraction.  As Hawkins shares a joke with Billy, unbeknown to them someone, or something is observing…

Martial arts star Jean-Claude Van Damme was originally brought in to play the Predator and participated in test-shoots before the initial creature design was abandoned.