Marvel’s first mainstream success outside of the comic book pages landed in the late seventies with Universal’s hit television series, ‘The Incredible Hulk’…

After being subjected to an overdose of gamma radiation, Dr. David Banner finds that in moments of stress and anger he undergoes a startling transformation into a green-skinned, physically superior but uncontrollable and raging creature…

The first major live action success for a Marvel Comics property, Universal’s television series The Incredible Hulk, premiering in the U.S. in 1977 and rerun throughout the 1980s and 1990s (and now more accessible via home video releases and on demand platforms), though a more grounded take on the character continues to be beloved by fans across the globe.

Developed by The Six Million Dollar Man’s Kenneth Johnson and starring Bill Bixby and Lou Ferrigno, The Incredible Hulk would launch with a feature length pilot, written and directed by Johnson, that first aired in November of 1977.  It introduces viewers to Dr. David Banner (the change from Bruce part of Johnson’s desire to deviate from traditional comic book tropes, such as alliterative character names) a physician and scientist who having lost his wife in a car accident has focused his attention on finding a way of unlocking the enhanced physical strength that humans can display in moments of great stress.  His experiments lead to an accidental overexposure of gamma radiation (in a research lab as opposed to the Cold War era desert bomb test in the original Marvel comic), although there appears to be no ill effects, a breakdown on his drive home causes Banner to become frustrated and angry, triggering his first transformation into the goliath green-skinned creature that will become known as ‘the Hulk’.  Enlisting the help of his colleague, Dr. Elaina Marks, Banner seeks to study his condition in the desperate hope of eradicating it – requiring the pair to force another change, which leads to dramatic consequences.

Bill Bixby is superb, bringing a believable essence of intellect to Banner neatly intertwined with the innate benevolence that makes his character and performance so likeable.  In the days before CGI, green body paint was required and the elaborately muscular Lou Ferrigno would prove perfect casting as the Hulk (the transformations achieved via those iconic sequences of Banner’s shirt tearing as bulging muscles push through, together with make-up and prosthetic effects) establishing a formidable physical presence befitting the part.  Yet, despite that Ferrigno was also adept at conveying the more innocent and childlike aspects of the character – his woodland encounter with a young girl in the pilot being a prime example of the creature’s capacity for tenderness in certain moments. 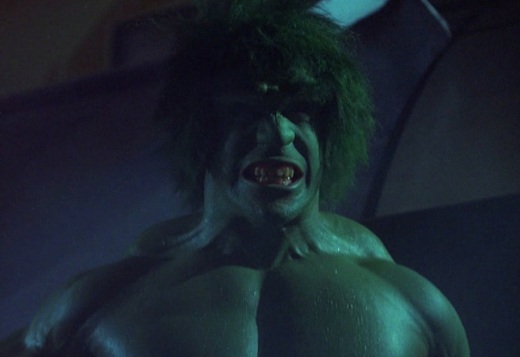 Portraying Elaina Marks, guest star Susan Sullivan is a great addition to the episode sharing wonderful chemistry with Bixby which (spoilers…) makes her demise all-the-more heartfelt and Banner’s tragedy greater.  Also introduced is Jack Colvin’s newspaper reporter Jack McGee, a character who would recur throughout the series and who witnesses the devastating lab explosion, resulting from Banner and Marks’ experiment and the Hulk’s emergence from the wreckage – pinning the incident and the ‘murder’ of Banner and Marks on the creature.  Beyond establishing the regular cast of Bixby, Ferrigno and Colvin the pilot also features the famous, often quoted “don’t make me angry” line and Joseph Harnell’s sombre but poignant ‘The Lonely Man’ theme music, which would close out each episode.

Although it may diverge from the source material, motivated by Johnson’s concept for an adult drama series instead of a “comic book” show (in any case a more faithful adaptation would have been difficult to accomplish convincingly given technical and budgetary limitations), The Incredible Hulk still adheres to the basic approach of the comics in that Banner is driven to find a cure for his ‘affliction’ and that the Hulk itself, though dangerous and powerful has a desire to protect the innocent.

The series would subsequently see Banner, believed to be dead, drift from town to town across America, taking on odd jobs under false names as he would search for a cure whilst evading McGee, who would continue to pursue his investigations of the Hulk.  The format, often compared to that of The Fugitive, would see Banner cross paths with various people from all walks of life, facilitating stories of social concern (covering subjects such as drugs, crime and domestic abuse) and consequently troubles that Banner would find himself becoming involved in and consequentially, situations which would trigger his anger-fuelled metamorphosis and have the titular green goliath press into action.

The pilot was followed by another extended episode, “Death in the Family“, before the first full season commenced in March 1978.  The Incredible Hulk would run for five seasons before being revived for three TV movies (for which Johnson was not involved and included appearances from iconic Marvel characters Thor and Daredevil) and remains a cherished favourite amongst fans and rightfully has prominence in the history of comic book adaptations for the small screen.

Richard Kiel – Jaws in the James Bond films The Spy Who Loved Me and Moonraker – was originally cast as the Hulk and although footage was shot for the pilot he was replaced by the more muscular Lou Ferrigno.

All images herein remain the property of the copyright owners and are used for illustrative purposes only.