As a mysterious and hostile force advances towards Earth, Admiral James T. Kirk is reunited with his former crew as he takes command of the newly refitted U.S.S. Enterprise on a mission to intercept the intruder…

Celebrating its fortieth anniversary this December, Star Trek: The Motion Picture may not be as popular as its 1982 sequel – Star Trek II: The Wrath of Khan – but its place and importance in the history of the franchise shouldn’t be overlooked.  Originally conceived as a pilot for a new Star Trek television series, the production would evolve into a big budget feature film in the wake of the success of Star Wars – although Star Trek: The Motion Picture would take more of a high-concept science fiction approach similar to that of Steven Spielberg’s Close Encounters of the Third Kind and Stanley Kubrick’s 2001: A Space Odyssey.

Produced by Gene Roddenberry (who would write the film’s interesting but slightly bizarre novelisation) and skilfully directed by The Day the Earth Stood Still’s Robert Wise with a story, credited to noted SF author Alan Dean Foster, that echoes elements of classic Star Trek episode “The Changeling”, Star Trek: The Motion Picture is presented on a visual scale that could only have been dreamt of back in the days of the original series.  The film opens as Klingon (the iconic Trek race given a more alien-like makeover for the big screen) warships commence an attack on an approaching force – an expansive and powerful cloud of energy which soon neutralises the aggressors.  As the cloud proceeds on a heading for Earth, an unfulfilled and desk-bound Admiral Kirk (William Shatner) convinces his superiors to place him in command of the newly refitted U.S.S. Enterprise on a desperate mission to intercept and establish contact with the intruder.

Believing the benefit of his experience and leadership will provide the best chance of success, Kirk initially finds himself troubled by an unfamiliarity with the refitted Enterprise and in conflict with her would be captain, Will Decker (Stephen Collins), whose situation is complicated further by the posting of his old flame, Ilia (the late Persis Khambatta, in her introductory film role) as ship’s navigator (Walter Koenig’s Chekov now occupying the post of security chief).

Dealing with engine troubles and a near fatal wormhole encounter before rendezvousing with science officer Mr. Spock (Leonard Nimoy) along the way, the stakes are raised as the Enterprise intercepts the approaching danger – traversing the energy cloud to discover a colossus alien vessel at its centre.  As Ilia is replaced by an android duplicate serving as a representative of the alien ship, Kirk learns that the intruder is ‘V’Ger’, a life-form on a journey to find and ‘join’ with its creator.  It all leads to a startling finale in which (spoilers follow…) Kirk and his crew face V’Ger, which they are astonished to discover is the lost 20th Century NASA probe, Voyager VI – repaired by an unknown machine race and sent on a return voyage to its point of origin where it can complete its programme of “learning all that is learnable” and providing all the information it has amassed to the creator.  Having gained sentience on its journey, V’Ger has reached the limits of its understanding and must evolve by joining with its creator…and one amongst the Enterprise crew volunteers to do so.

The film is commonly criticised for its slow pace (detractors unfairly labelling it as ‘The Slow Motion Picture’) and whilst this may be true, Star Trek: The Motion Picture is best viewed for what it is – a cerebral cinematic experience that reunites an iconic and beloved set of characters, unfolding steadily and subjecting the viewer to some striking visuals as it presents intriguing and intelligent science fiction ideas.  Despite the more conceptual and visually driven story, the cast are all reliably great – especially the central trio: William Shatner, Leonard Nimoy and DeForest Kelley, representing, respectively, the celebrated troika of Kirk, Spock and McCoy.  As the main star, Shatner is provided with some decent material as the ever-passionate Kirk wrestles with his regret at accepting promotion and his yearning to return to command of a starship.  Likewise, Nimoy gets to once again grapple with Spock’s conflicted half human/half Vulcan nature, his sensing of V’Ger and an inability to attain ‘Kholinahr’, the Vulcan ritual of complete emotional purging, driving his desire to re-join the Enterprise crew and seek out the mysterious invader.  DeForest Kelley’s Doctor McCoy is once again the cantankerous yet valued conscience and moral centre.

The production design and special effects for Star Trek: The Motion Picture are reasonably impressive considering their age.  The redesigned Enterprise is simply beautiful, brought to life by the superb model work.  The sets are sparse but have an appropriately futuristic feel to them as do the crew uniforms which are a fitting evolution of those in the original series in comparison to the more military-based attire of the sequels.  In terms of the effects, led by 2001’s Douglas Trumbull and Star Wars’ John Dykstra, they remain a key element, the mesmerising sequence of the Enterprise’s penetration of the cloud, the jaw dropping ‘V’Ger flyover’ scenes and Spock’s ‘spacewalk’ being the most obvious highlights – in addition to the wonderfully executed launch of the Enterprise, of course.  Jerry Goldsmith’s Oscar nominated score is one of the composer’s best and an inseparable accompaniment to the story and visuals, capturing the romance and majesty of space in the 23rd Century, the grandeur of the Enterprise, the eerie mystery of the enigmatic force that threatens humanity and the wonders of the unknown.

It’s no secret that the production of Star Trek: The Motion Picture was troubled by last minute script re-writes, increasing costs (its budget inflating to a then eye-watering $46 million, making it the most expensive feature film at that time) and a tight schedule to meet its 7th December 1979 release date, leaving director Robert Wise with no time to produce a final cut and unsatisfied with the film in its theatrical form.  Much of this was remedied with the 2001 DVD release of Star Trek: The Motion Picture – The Director’s Edition, a superior edit of the film with Wise reinstating some of the more character-orientated scenes missing from the theatrical version whilst trimming down some of the longer and more superfluous moments, a fresh sound mix and new CGI effects to enhance and embellish the existing visuals.  Unlike the Star Wars Special Editions, the changes made were to benefit what Wise felt was an unfinished film and, largely, choices that would have been made in 1979 had the production been permitted the extra time and resources required.

Despite receiving a critical drubbing Star Trek: The Motion Picture would prove a box office success, paving the way for several sequels and an eventual television rebirth of the franchise.  Whilst Star Trek II: The Wrath of Khan is considered to be closer to the overall spirit of the original Star Trek series with a deeper focus on the characters and emphasis on morality play elements (whilst injecting a larger measure of action and excitement), Star Trek: The Motion Picture is perhaps more cinematic and – especially in its Director’s Edition form – an enjoyable and underrated first big screen adventure for Kirk, Spock and company that’s deserving of a revisit and perhaps a reappraisal as it reminds us that “The Human Adventure is Just Beginning”…

Read the classics review of Star Trek II: The Wrath of Khan here

Mark Lenard, who portrayed Spock’s father in the original Star Trek series appears as a Klingon commander in the epic opening scenes of Star Trek: The Motion Picture.

Image(s) used herein are utilised for illustrative purposes only and remain the property of the copyright owner(s). 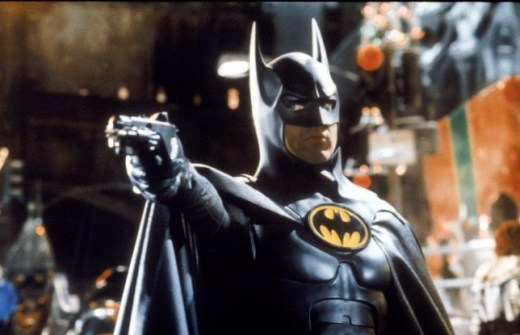 Batman faces a new challenge when a corrupt businessman plots with the villainous Penguin to seize control of Gotham City, with matters further complicated by the appearance of the mysterious ‘Catwoman’…

Given the blockbuster success of Batman in the summer of 1989, Warner Bros. Pictures were naturally keen on producing a sequel.  Released in June of 1992, Batman Returns, whilst not as good as its landmark predecessor (although for some the reverse applies) easily qualifies as a strong second outing for Michael Keaton’s Dark Knight.  Although there’s slightly less focus on Bruce Wayne/Batman, Batman Returns is still very much a Batman film lovingly produced through the dark gothic imaginings of Tim Burton.  It’s clear that Burton was given more creative freedom as Batman Returns has even more of an idiosyncratic and fantastical touch that makes it unmistakably a Tim Burton film, but still feels appropriate for a major Batman feature born in the era of seminal comics works The Killing Joke and The Dark Knight Returns and would also serve to inspire the exemplary Batman: The Animated Series.

Having formerly taken on Jack Nicholson’s Joker, Batman Returns doubles the jeopardy with two main antagonists – the Penguin and Catwoman, who are reinvented for this iteration.  Danny DeVito lives and breathes the role of Oswald Cobblepot – otherwise known as ‘the Penguin’ – his podgy, diminutive build, pointed nose and flipper-like hands giving him somewhat of a grotesque and literally penguin-like appearance, effectively evoked via the brilliant make-up design.  Much like the ‘monsters’ of the classic Universal horrors, his villainy is driven by tragedy – specifically, abandonment by his parents as an infant – and a desire for acceptance.  Michelle Pfeiffer is a similar revelation as Selina Kyle, starting out as the meek underdog before the fateful incident that leads to her ‘rebirth’ as the sultry and formidable Catwoman who, like Bruce Wayne, finds herself grappling with dual personas.

Colluding with DeVito’s Penguin is the excellent Christopher Walken (who previously proved his worth as a villain in James Bond outing A View to a Kill) as devious Gotham businessman Max Schreck – named after the actor who portrayed Count Orlock in the classic German horror Nosferatu – who brings further weight to the threat Batman must face.  As for Michael Keaton he continues to impress, deftly straddling the line between his two identities bringing emotional complexity to Bruce Wayne, aided greatly by the chemistry he shares with Pfeiffer’s Selina Kyle, whilst applying a confident measure of brooding and intensity once he dons the iconic cape and cowl of the Batman.

Batman Returns is a very atmospheric film (benefitting from another great Danny Elfman music score), the Christmas holiday setting and frequent snowfall adding a feeling of wintry crispness to the gothic chill evoked by Bo Welch’s wonderful sets which build upon Anton Furst’s Academy Award winning work on the previous film.  A gentle increase in humour provides an element of quirkiness and levity (especially in the exchanges between Bruce and Michael Gough’s Alfred) without undermining the darker and more dramatic themes of the story.  As with Batman, the stunts and choreography in the fight sequences are top-notch and coupled with superbly staged action set-pieces (bolstered by some deftly executed pyrotechnics) provide plenty of visual excitement.  It all makes for a fun and artfully crafted comic book blockbuster at a time when such a thing wasn’t so common.

All images herein remain the property of the copyright owners and are used for illustrative purposes only.