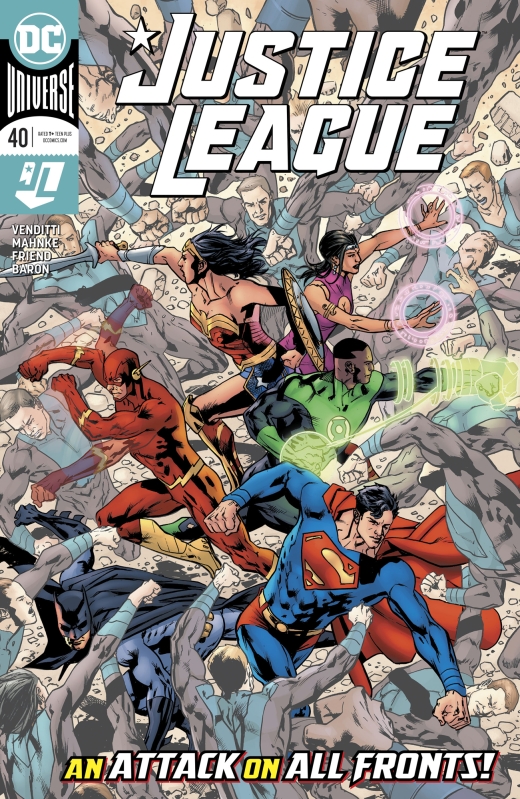 “Impact” Part 1 : crashing to Earth, ex-Green Lantern Corps member Sodam Yat delivers a stark warning of an incoming invasion to the Justice League, lead by an old foe of Superman’s…

Hal Jordan and the Green Lantern Corps and Hawkman writer Robert Venditti takes the reigns of DC’s leading team-up title Justice League as issue #40 presents a fresh start with the first chapter of a new story arc, “Impact”.  Venditti’s tenure follows a largely enjoyable run written by Scott Snyder and James Tynion IV and with Justice League #40, necessarily scales things back a little and neatly streamlines the superhero group’s roster to a core line-up of Superman, Batman, Wonder Woman, The Flash and John Stewart’s Green Lantern.  It seems that Snyder’s close to issue #39 may not have been what readers may have expected – a cliffhanger of sorts (that in hindsight maybe wasn’t?) – as it isn’t addressed by Venditti who instead favours a clean break whilst acknowledging recent events in the wider DC Universe, such as Superman’s reveal of his true identity to the world (in last December’s Superman #18 by Brian Michael Bendis and Ivan Reis).  After the mind-bending plethora of ideas infused into the book by Messrs Snyder and Tynion it’s an appropriate reset that allows ongoing readers to re-orientate themselves and provide an access point for new fans to jump onboard – and it generally works (there is of course a lot going on in the DC canon of late), making for a solid first issue for the new Justice League writer.

Robert Venditti builds an entertaining and appealing opening instalment of “Impact”, quickly demonstrating his knowledge of the DCU and the characters he utilises for Justice League – with an effective grasp of the familiar dynamics between the various heroes (the conflicted but brotherly Batman/Superman interplay providing some small but key moments).  It may be quite a wordy narrative, and a great deal of the issue is merely setting the stage, but there’s still a decent helping of action to accompany the drama, tension and the high stakes (dialling things back to the more manageable and comprehensive playing field of a single universe) established, wasting no time in introducing a new threat for the League to face: the return of the Eradicator – the cold and ruthless Superman clone who debuted during “Reign of the Supermen” in the 1990s.  Receiving warning from former Green Lantern, Daxam’s Sodam Yat, who crashes to Earth, the Justice League learns the news that the Eradicator has engineered an army of Daxamites free from their Kryptonian vulnerabilities and plans to decimate the planet, beginning a campaign of conquest across the universe.  The Eradicator can often be overlooked and perhaps underrated as a Superman villain and Venditti affirms that in the right hands he can be a powerful (both literally and figuratively) antagonist, without violating the known traits of the character and is bound to provide a significant challenge for our heroes to unite against.

The art by penciller Doug Mahnke (with inks by Richard Friend and colours by David Baron) is very good and although there are some rough and sketchy spots here and there, it’s a great looking comic that’s visually epic and exciting in all the right instances with the more confined, character-focused scenes being equally well-defined and together with Venditti’s script it all keeps the reader engaged and provides plenty of anticipation for what’s to come.

Justice League #40 is published by DC and is available in print and digital formats now.