“A question.  Since before your sun burned hot in space and before your race was born, I have awaited a question” 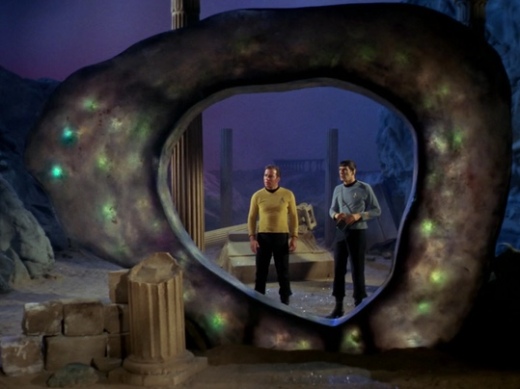 Captain Kirk and Science Officer Spock travel back in time in pursuit of a delirious Doctor McCoy, crazed by an accidental overdose of a powerful drug, in order to prevent disastrous changes in the timeline…

Once aptly described by film critic Scott Mantz as “the Citizen Kane of Star Trek”, “The City on the Edge of Forever” is a firm fan favourite and irrefutably one of the finest ever Star Trek episodes.  From a story written by the late science fiction author and television writer Harlan Ellison, “The City on the Edge of Forever” received significant, uncredited rewrites from Star Trek writer/producer Gene L. Coon, story editor D.C. Fontana and finally, series creator Gene Roddenberry in order to temper some of Ellison’s more radical ideas that didn’t align with the altruistic nature of the series and behaviour of its characters (drug-dealing Enterprise crewmembers would clearly be out of place) and other elements that the show’s budget simply couldn’t allow.  Thankfully, the result is nothing less than an unforgettable masterpiece of imaginative and dramatic SF-TV.  The episode rightfully earned the Writers Guild of America Award for Best Episodic Drama on Television as well as the Hugo Award for Best Dramatic Presentation.

“The City on the Edge of Forever” opens as the U.S.S. Enterprise arrives at an unexplored planet to investigate the source of mysterious ‘time ripples’.  The ship is rocked, causing helmsman Sulu (George Takei) to be injured and whilst being treated, Doctor McCoy (DeForest Kelley) accidentally injects himself with a dangerous overdose of a drug which renders him paranoid and maniacal.  Pursuing McCoy to the planet below, Captain Kirk (William Shatner) and his landing party discover ancient ruins and a strange, sentient stone structure – a gateway through time that calls itself the ‘Guardian of Forever’.  As the Guardian demonstrates its ability, the deranged McCoy leaps through the gateway.  Following McCoy to a point before his arrival, Kirk and his loyal Vulcan first officer, Mr. Spock (the always superb Leonard Nimoy) find themselves in depression-era New York and eventually in the 21st Street Mission, run by the pacifist Sister Edith Keeler (Joan Collins).  Accessing historical records from his tricorder device, Spock soon discovers that McCoy has somehow caused an unfolding change in events – whereas Edith Keeler had originally died in an accident, she now survives and her campaign for peace would lead to a delay in the United States’ entry into the Second World War, allowing the victory of Nazi Germany – creating a ripple effect of unfathomable consequences.  As they await McCoy’s arrival through the time stream, Spock informs his captain that in order to save the future, Keeler must die…but Kirk finds he has fallen in love with her. 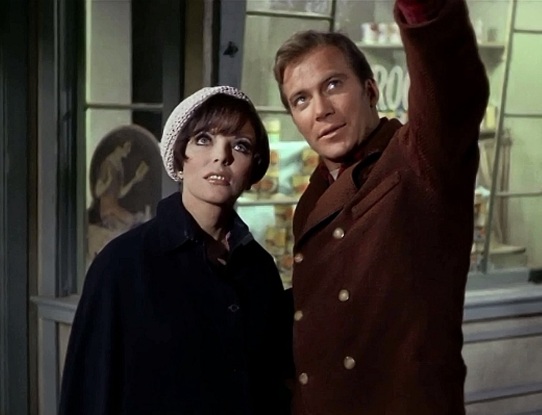 Kirk faces a moral dilemma as he falls for Sister Edith Keeler (Joan Collins) in “The City on the Edge of Forever” (image credit: ViacomCBS).

It’s a great story and a standout episode for William Shatner, whose passionate performance is remarkably effective and bittersweet.  Despite the more dramatic aspects of the story, there are some terrific comic moments in the second act – Kirk and Spock being caught ‘acquiring’ 20th Century clothing by a patrolling police officer leads to a hilarious scene in which Kirk attempts to explain the alien Spock’s appearance, one of many moments in the episode that demonstrates the magnificent interplay and rapport between Shatner and Leonard Nimoy.  Shatner also shares wonderful chemistry with guest star Joan Collins, who is charming as Edith Keeler, a woman beyond her time who dreams of a hopeful future for all of humanity – a future that the gallant Captain Kirk knows to be true.  It gives “The City on the Edge of Forever” an evocative philosophical angle to accompany the story’s grand science fiction aspects and solid characterisation.  “The City on the Edge of Forever” is also, undoubtedly, a strong outing for co-stars Leonard Nimoy and DeForest Kelley – who puts in a particularly memorable turn as the crazed drug-afflicted McCoy, whom Keeler nurses back to health – and a highlight of the friendship between Kirk, Spock and McCoy which is both embraced and put to the test as Kirk faces perhaps his greatest and most personal moral dilemma.

The climactic moments of “The City on the Edge of Forever” are agonising (all the more dramatic thanks to some tense direction by Joseph Pevney) given there is only one inevitable outcome and provides an unusually sombre, yet poignant, ending for an episode of Star Trek.  It all creates a must-see classic which represents the Star Trek franchise at its absolute best.

Discovering that McCoy has arrived and is healthy, Kirk rushes across the street to greet his friend – as Edith steps into the road, unaware that a fast-moving truck is approaching…

Harlan Ellison’s original script for “The City on the Edge of Forever” would later be adapted into comic book form as a mini-series from IDW Publishing, released in 2014.

Star Trek: The Next Generation – “Yesterday’s Enterprise” : Captain Jean-Luc Picard faces a difficult decision when the appearance of the Enterprise ‘C’ through a time vortex adversely alters history.