A man wanders into a small town devoid of people, with no memory of who he is or how he got there he tries to unravel the enigma…

Celebrating it’s 60th anniversary this year, Rod Serling’s classic science fiction/fantasy anthology series The Twilight Zone began airing in October of 1959.  Frustrated by the rigid censorship of television, Serling (much like Gene Roddenberry would later do with Star Trek) used The Twilight Zone as a means of telling imaginative, thought-provoking stories exploring the human condition and often touching upon issues of the day that would otherwise be unlikely to escape the scrutiny of TV executives.  The series is also famous for its surprise twist endings providing a memorable outcome, several of which have become quite iconic.

Written by Serling (who would, impressively, go on to write or co-write 92 of the series’ 156 episodes) and directed by Robert Stevens, “Where is Everybody?” is the debut episode of The Twilight Zone.  It stars Forbidden Planet’s Earl Holliman as a lone amnesiac who wanders into a deserted town as he tries to figure out who he is and why the streets and buildings are empty.  Serling’s talent as a writer is evident from the outset and whilst “Where is Everybody?” may not deal with hard-hitting social issues it is an engrossingly mysterious tale about isolation and loneliness that keeps the viewer intrigued and engaged throughout the 25-minute running time.  Holliman is great in the central role and together with the monologues Serling (who draws the audience in with his opening narration) provides for the actor, we truly get a sense of the unease and exasperation his character endures – the only clue to his identity being the Air Force flight suit he is wearing. 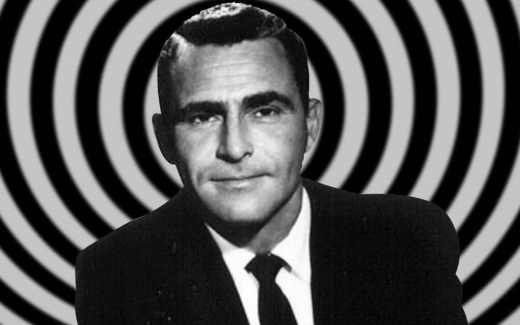 Director Robert Stevens keeps things moving along steadily, never keeping the camera fixed in one place for too long and there’s some particularly effective use of lighting and off-angle shots in the climactic night-time scenes that increase the spookiness of the story as well as the feeling of increasing anxiety and desperation of Holliman’s character.  The sequence in which Holliman enters an empty movie theatre and the shock as the projector begins running is a quintessentially classic Twilight Zone moment of conception, acting and execution.  “Where is Everybody?” is also enhanced greatly by the atmospheric and eerie music score by Bernard Herrmann, perhaps best known at that time for The Day the Earth Stood Still before going on to frequently collaborate with legendary filmmaker Alfred Hitchcock.

The final twist (to spoil it would be cruel) establishes The Twilight Zone’s most celebrated trope of pulling the rug from underneath the viewer and an example of Rod Serling’s gift for imagination and forward thinking.  Running for five seasons, The Twilight Zone was revived in the 1980s and a short-lived series was also produced in 2002.  A film adaptation with contributions from directors such as Steven Spielberg and John Landis was released in 1983 and the series has since been rebooted for the CBS All Access streaming platform, fronted by Get Out’s Jordan Peele.  Yet nothing compares to Rod Serling’s beloved black and white original series (with reruns continuing to this day) and “Where is Everybody?” serves as an enjoyable and fitting introduction to the wonders of The Twilight Zone.

Superstar Tony Curtis was originally considered for the main role in “Where is Everybody?” but most likely deemed too expensive.