Faced with the onslaught of gigantic creatures, awoken from their prehistoric slumber – the organisation known as Monarch find that there’s only one hope for humanity: the mighty Godzilla…

Following Gareth Edwards’ Godzilla, the 2014 Hollywood reboot of Japanese studio Toho’s most famous monster and Jordan Vogt-Roberts’ Kong: Skull Island (released in 2017), Godzilla: King of the Monsters serves as the next chapter in Warner Bros/Legendary Pictures’ ‘MonsterVerse’ film series (which is set to culminate in Godzilla vs Kong next year).  Directed and co-written by Michael Dougherty, Godzilla: King of the Monsters is a visual feast that’s a little dumb and sometimes overly frenetic, but ultimately a whole lot of monster bashing fun.

Godzilla: King of the Monsters picks up five years after the events of Godzilla in which the titular apex predator – or ‘Titan’ – emerged victorious in his battle against the ‘MUTO’ creatures, saving humanity but at great personal cost for some with the city of San Francisco left decimated.  Since Godzilla’s disappearance the Monarch organisation has continued its research and investigation of the various ancient Titans – amongst them King Ghidorah (a three-headed dragon), Mothra (aptly, a giant moth) and Rodan (a sort of demonic Pteranodon) – discovered in their dormant states at various locations around the globe.  When the creatures are awakened by eco-terrorist Jonah Alan (Game of Thrones’ Charles Dance), Monarch once again find their only hope in preventing annihilation may be Godzilla, the mighty king of all monsters.

Although characterisation is patchy, the dialogue occasionally ropey (and the persistent volley of wise-cracks from Bradley Whitford’s Monarch boffin aren’t entirely successful) and cookie-cutter gung-ho military types dumbing things down a tad, like Gareth Edwards’ film there’s a certain amount of human interest – the broken family unit (torn apart by tragic circumstances) is nothing new but it provides some emotional depth with Kyle Chandler’s estranged father Mark Russell (and former Monarch employee), whizz-kid daughter Madison (Stranger Things’ Millie Bobby Brown) and mother Emma (and Monarch scientist), played by Vera Farmiga, placed firmly at the centre.  Some of the character motivations are questionable, even far-fetched and Charles Dance is woefully underutilised but luckily a returning Ken Watanabe (as Doctor Serizawa) is well served by the script and given a satisfying arc.  The use of bio-acoustics as a method of controlling the Titans is also a neat concept as is the notion that their conflict as a way of restoring the balance of nature that humanity has corrupted.

Make no mistake though, this is a Godzilla film and not Citizen Kane and King of the Monsters is at its best when dealing with its monster action and it fully delivers in its CGI kaiju smack-downs (the creatures thankfully remaining faithful to their original Toho designs), saturated with jaw-dropping effects rendered on a behemothic scale.  An overzealous employment of quick-cuts and shaky-cam in the visuals makes the spectacle a bit messy and nauseating at times but that aside, director Michel Dougherty (who previously helmed the fantasy horror flick Krampus and has co-writer credits on Bryan Singer’s X-Men 2 and Superman Returns) maintains a steady grip on things.

In the end, King of the Monsters may lack some of the class and sophistication of 2014’s Godzilla (and there’s something to be said of that film’s divisive approach, the steady build-up facilitating a more rewarding pay-off) but with its spirited homage to the zany comic book B-movie sci-fi of Toho’s original films, Godzilla: King of the Monsters has value as a piece of popcorn entertainment and an enjoyable prelude to Godzilla vs Kong.

The bottom line:  Godzilla: King of the Monsters is a fun, undemanding slice of kaiju action that joyfully evokes the spirit of those kitsch Toho creature features.

Godzilla: King of the Monsters is in cinemas now.

All images herein are utilised for illustrative purposes only and remain the property of the copyright owner(s).

Rescued from imprisonment, Jyn Erso is enlisted by the Rebel Alliance for a mission that will lead to the retrieval of the plans for the ‘Death Star’, the Empire’s new planet-killing weapon…

Following the colossal success of The Force Awakens, Rogue One sees Disney/Lucasfilm unleash the first of their standalone ‘Star Wars Story’ anthology films to help sate the cravings of audiences whilst they await Episode VIII.  Such a project could easily be labelled as greedy and corporate minded, but luckily Rogue One proves its worth as a satisfying and engaging addition to the Star Wars universe.

Set prior to the opening events of 1977’s Star Wars – now retroactively known as Episode IV: A New Hope – Rogue One slots comfortably between the prequel trilogy and those much beloved and iconic original films without feeling contrived or unnecessary as it embellishes A New Hope by telling the story of the Rebel Alliance’s daring mission to retrieve the plans for the ‘Death Star’, the evil Empire’s new devastating, planet-killing weapon.  Felicity Jones (The Theory of Everything) is a strong and capable lead as convict-turned-Rebel ally Jyn Erso, daughter of Imperial Scientist Galen Erso (Mads Mikkelsen) who, together with Rebel Captain Cassian Andor (Diego Luna) assembles a rag-tag band of fighters including Chirrut Imwe (Donnie Yen), a blind man who is strong with the force, his companion Baze Malbus (Wen Jiang) and defecting Imperial pilot Bodhi Rook (Riz Ahmed) to battle against Ben Medelsohn’s Orson Krennic and the forces of the Galactic Empire.

Whilst Jones and Luna are clear standouts and best served by the screenplay’s characterisation, it’s reprogrammed Imperial droid K-2SO – voiced by Firefly’s Alan Tudyk – that often steals the show with a snarky and cantankerous attitude that provides much of the film’s dark humour and even some of its heart and soul.  Mads Mikkelsen (most recently providing the villainy in Marvel’s Doctor Strange) makes the most of his limited screen time but at least gets to make more of an impression than Forest Whitaker who is criminally underused as the gruff Rebel fighter Saw Gerrera, a face from the Erso’s past who would’ve warranted further development along with Jyn’s earlier years to further flesh out her ‘rebellious’ backstory.  Small quibbles aside, despite a slightly sluggish start Rogue One jumps to hyperspace once we get to the central plot, sending the viewer on an epic, action-packed ride that makes amends for any earlier narrative shortfalls and pacing issues.

This is most definitely still a Star Wars film yet one that is more grounded in the nitty gritty of warfare (with subtle shades of Saving Private Ryan and Platoon) and doesn’t shy away from the grey areas of ‘good vs evil’, the more mystical elements of the franchise mostly restricted to Imwe’s sporadic ramblings concerning the force.  It’s certainly all in the favour of Rogue One, mining some largely unexplored territory that enriches it all the more.

Director Gareth Edwards (Godzilla) stages some incredibly exciting and visually impressive set pieces that easily rival the action of The Force Awakens, much like what J.J. Abrams achieved there’s a real sense of heft and physicality to the film’s elaborate space battles as well as its ground focused combat as Rebel soldiers take on the Empire’s Stormtroopers and X-Wings swoop in to tackle Imperial walkers.

Rogue One not only looks great but also via its production design and costumes faithfully replicates the era of A New Hope as it was created by George Lucas and his team back in 1977.  Yes, it can still be taken as a standalone story but for fans of Star Wars, it’s actually Rogue One’s connectivity to the overall universe and saga – complemented by numerous easter eggs and lashings of fan service (some more pleasing than others, with the inclusion of Darth Vader handled particularly well) – that is perhaps one of its greatest appeals.

The bottom line:  The Star Wars franchise continues confidently with the highly enjoyable and epically realised Rogue One, providing plenty of excitement for fans and casual viewers alike.

Rogue One: A Star Wars Story is in cinemas now. 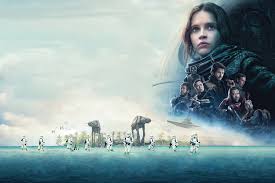 Jyn Erso (Felicity Jones) leads a rebellious bunch against the Empire in Disney/Lucasfilm’s ‘Rogue One: A Star Wars Story’.

Fifteen years after a devastating nuclear incident at a Japanese power plant, the world’s most famous monster is awakened…

This version is an exciting and often surprising interpretation that manages to stay firmly faithful (and respectful) to the history of the infamous monster.  I say that it often surprises, mainly for the fact that Gareth Edward’s film may have the elements of a crowd-pleasing blockbuster yet to simply label it as such would do it a disservice.  Indeed there is awesome spectacle and incredible special effects that bring the blockbuster moments to life (worthy of the extra cost of an IMAX ticket, although don’t expect any ground-breaking use of 3D), yet Godzilla is paced more slowly than you might have anticipated – teasing the reveal of cinema’s ‘King of the Monsters’ through glimpses of grainy historic footage and quick cuts to live news coverage.  This slow-burn approach feels right and appropriate for what is clearly intended as an origin story and proof that handling a Hollywood production in such a manner can be just as effective as your average – often breakneck paced – franchise behemoth.  Think more along the lines of Alien and Predator here than, say, Transformers.

As with Ishiro Honda’s 1954 film (and its many sequels), the story is largely told from a human perspective that provides a decent enough emotional core that’s not quite as satisfying as Super 8 (for example) but manages to hold interest between those monstrous large-scale set-pieces.  Breaking Bad’s Bryan Cranston amazes in the role of grieving father/disgraced scientist, demanding the audience’s attention with every line felt as well as heard.  Batman Begins and Inception star Ken Watanabe also delivers another believable character, Aaron Taylor-Johnson is less of a draw as Cranston’s son, yet via the film’s script delivers a refreshingly grounded take on the clichéd ‘military man’ (thankfully there’s no gung-ho Team America-esque characterisation here).  Elizabeth Olsen is given little to do beyond standard doting wife/devoted mother fare but between herself and Johnson (as I’ve said) there is enough character depth and emotional resonance to carry things forward.

It’s worth noting that much as the original film was born out of Japan’s nuclear fears (and more pertinently the scars of World War II), the new Godzilla wisely upholds those fears whilst tapping into the post-9/11 zeitgeist with dashes of ecological commentary as the film’s characters deal with tsunamis and nuclear meltdowns.

With Monsters, Gareth Edwards proved more than adept with balancing story, character and spectacle and repeats that on a much larger scale with Godzilla without becoming overwhelmed amongst the film’s massive and destructive set-pieces, keeping the visuals fluid and steady.

Of course I couldn’t end this review without commenting on Godzilla himself.  In another wise creative move that sets this film a world apart from the 1998 version is the creature design, which remains largely faithful to the original, iconic, rubber suit.  In fact you could easily argue that this is the best looking Godzilla design ever, the intricacies of every tiny detail allowed by the use of big budget CGI simply cannot be rivalled.

The bottom line:  With a healthy blend of grand visuals, some decent social commentary and emotional resonance, Godzilla is a monster of a hit that lays the path for a promising new iteration of the franchise.

Godzilla is in cinemas now.

What are your thoughts on Godzilla?  Leave your spoiler-free comments below!