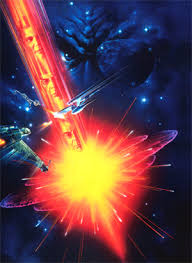 ‘Star Trek VI: The Undiscovered Country’: a satisfying conclusion to the voyages of the original crew.

When the Klingon Chancellor is assassinated enroute to peace talks on Earth, Captain Kirk and Dr. McCoy are accused of the crime leaving Spock and the crew of the U.S.S. Enterprise to uncover the true culprits…

With the lukewarm reception of Star Trek V: The Final Frontier (read the retrospective here), Star Trek’s future on the big screen seemed to be in doubt.  Yet, with the franchise’s 25th anniversary approaching, Paramount Pictures decided that the original cast deserved one more adventure before relinquishing the silver screen to their younger (and by this point, less costly) successors on the increasingly popular spin-off series Star Trek: The Next Generation.

Determined to deliver a classic and rewarding finale for the original crew (albeit William Shatner, James Doohan and Walter Koenig would cameo in Star Trek Generations) and one that would be equally redeeming for the audience, Paramount enlisted Leonard Nimoy and Nicholas Meyer to help shape Star Trek VI, both having been involved in the more successful and more popular entries in the series – Nimoy as director of Star Trek III: The Search for Spock and Star Trek IV: The Voyage Home and Meyer as director (and uncredited writer) of Star Trek II: The Wrath of Khan and co-writer of The Voyage Home.  With Harve Bennett feeling jaded by the troubled production of Star Trek V and disagreements with Paramount over the direction of Star Trek VI (the concept for a prequel featuring a new cast as younger versions of Kirk, Spock, McCoy et al being rejected by the studio) he would decide to depart the franchise leaving Ralph Winter in place as the film’s head producer.

The creative matchup of Nimoy (receiving executive producer and story credits) and Meyer would prove to be a strong and vital component to Star Trek VI, both looking to do what they felt the franchise did best – tell a compelling story that explores the human condition and discusses the issues of the day in an entertaining and engaging manner.  With the social and political climate of the 1990s being shaped by the fall of the Berlin Wall and the climax of the Cold War, Nimoy felt that this would make for a suitable and relevant topic of discussion for a good Star Trek story, one that would once again feature the original crew’s greatest adversaries: the Klingons.  Given that the Klingons were conceived by Star Trek writer/producer Gene L. Coon as a stand-in for the Russians and to provide conflict allegorical of Cold War tensions between the United States and the Soviet Union, their role in the story would be a natural and logical fit.  From this central concept, Star Trek VI: The Undiscovered Country (a title lifted from Shakespeare’s Hamlet) was born.  Working from Nimoy’s premise, Meyer would craft the film’s screenplay with co-writer Denny Martin Flinn, providing a dark, yet ultimately optimistic tale infused with all the fun, humour and excitement audiences had come to expect from a Star Trek film.

Star Trek VI opens with the destruction of the Klingon moon Praxis, the Klingon Empire’s key source of energy (an event likened by Nimoy as a galactic version of the Chernobyl incident), leading to a call for peace with the United Federation of Planets.  Three months from retirement, Kirk and his crew are ordered to rendezvous with the Klingon Chancellor’s delegation and escort them to Earth to open negotiations, but when the Chancellor is assassinated, Kirk and McCoy are put on trial for plotting Gorkon’s murder and sentenced to life imprisonment.  What follows is a thrilling ‘whodunit’ which sees Spock and the crew of the Enterprise in a race against time to uncover the perpetrators and rescue their comrades before peace talks falter and all-out war becomes certain.

Heading up the guest cast are David Warner (who had appeared as St. John Talbot in The Final Frontier and as a time-travelling Jack the Ripper in Nicholas Meyer’s directorial debut, Time After Time) as the “Lincoln-esque” Klingon Chancellor, Gorkon, Christopher Plummer as his villainous chief of staff, the Shakespeare-spouting General Chang, Rosana Desoto as Gorkon’s daughter (and successor) Azetbur and a post-Mannequin, pre-Sex in the City Kim Catrall as the Enterprise’s new Vulcan helmsman, Valeris.  Reprising their roles from The Voyage Home are Brock Peters as Admiral Cartwright, John Schuck as the Klingon Ambassador and Mark Lenard as Vulcan Ambassador and Spock’s father, Sarek. 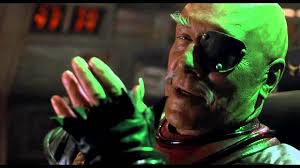 With a screenplay laced with strong dialogue and characterisation, Nicholas Meyer draws out fine performances from the principal and guest actors alike ensuring that each of the core Star Trek characters get their moment in the spotlight, especially George Takei who relishes the advancement of the loyal Mr. Sulu to Captain of the U.S.S. Excelsior.  Christopher Plummer makes for a great villain, excessive and passionate quotations of Shakespeare only adding to his increasing malevolence.  William Shatner, Leonard Nimoy and DeForest Kelley are once again on top form with Shatner and Kelley in particular sharing some memorable scenes together during their trial and subsequent sentence to the penal mining asteroid, Rura Penthe.

It’s reported that Gene Roddenberry (whose health was in serious decline) had concerns about The Undiscovered Country, specifically the prejudice and bigotry displayed by the Enterprise crew and the more militaristic approach to Starfleet, conflicting with the more altruistic vision he had for Star Trek and its characters.  These are certainly valid points but can largely be forgiven when taken in the context of the film’s story and the history of the conflict between the Federation and the Klingon Empire and those aforementioned parallels to America and Russia.

Climaxing with a tense and exciting finale featuring an explosive space battle between the Enterprise, Excelsior and a prototype Klingon vessel and a desperate race to prevent the assassination of the Federation President (played by Robocop’s Kurtwood Smith), Star Trek VI: The Undiscovered Country is a fitting conclusion to the original cast’s tenure and a satisfying celebration of the franchise that remains one of its most enjoyable big screen instalments.

Star Trek VI includes a cameo from one of Hollywood’s hottest rising stars of the 1990s – and Star Trek fan – Christian Slater.

What are your memories of Star Trek VI? Share your thoughts below! 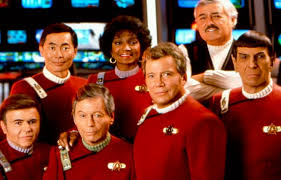 Once more unto the breach: the original cast of ‘Star Trek’ assembled for their final adventure…

A documentary charting the life and career of actor Leonard Nimoy and the character of Mr. Spock…

Declared as the most successful Kickstarter campaign ever, Adam Nimoy’s celebration of his father Leonard’s career and most significantly the creation of the iconic Star Trek character, Mr. Spock, arrives just in time for the franchise’s 50th anniversary.  Enlisting the thoughts and opinions of family, friends, colleagues and fans (celebrity and none), For the Love of Spock is affectionate, funny (including some brief pondering of that hilarious and infamous Kirk/Spock ‘slash fiction’ with Leonard’s Star Trek co-star George Takei), candid and even, in moments, a little tear-jerking.

Via the guidance of Adam Nimoy, For the Love of Spock digs deep to explore the man behind Spock and how he ultimately created and refined the character who is beloved by millions all over the world.  Incorporating archive footage of Leonard (who passed away last year) and newly recorded interviews with the likes of fellow Star Trek stars William Shatner, George Takei, Nichelle Nichols and Walter Koenig along with the principle cast of the reboot film series, directors Nicholas Meyer and J.J. Abrams, scientist Neil deGrasse Tyson, The Big Bang Theory star Jim Parsons and Leonard’s daughter, Julie the documentary is insightful in its dissection of the cultural impact of Spock and why a fictional character would mean so much to so many (its perhaps J.J. Abrams who encapsulates it so perfectly as he talks about the outsider in all of us).

For the Love of Spock is also a very personal endeavour for Adam Nimoy as he discusses, quite honestly, the often strained relationship he had with his father and the effect that fame had on the young Nimoy family.  It’s to the benefit of the project that Nimoy is open about this and is not reticent to attribute how issues in his own life contributed to the schism between father and son and is ultimately triumphant in celebrating their reconciliation in the years before Leonard’s death.

Technically, For the Love of Spock is well-structured and deftly assembled with clips from the original Star Trek series and spin-off films interspersed neatly between the various interview segments and archive footage – including a treasure trove of family home movies.  There’s not a great deal that’s new for die-hard Star Trek fans but ultimately, Adam Nimoy delivers an unmissable celebration of a man and his legacy.

The bottom line:  For the Love of Spock is a fitting tribute to the late Leonard Nimoy that’s lovingly crafted and an essential insight into an important cultural icon.

For the Love of Spock is available to download/stream now via iTunes, Amazon and a host of other video on demand platforms. 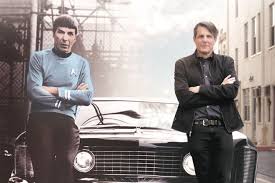 Man and icon: Adam Nimoy’s ‘For the Love of Spock’ is a fitting tribute to his father and the legacy of Mr. Spock.