Looking back at the epic series premiere for Glen A. Larson’s SF TV cult classic… 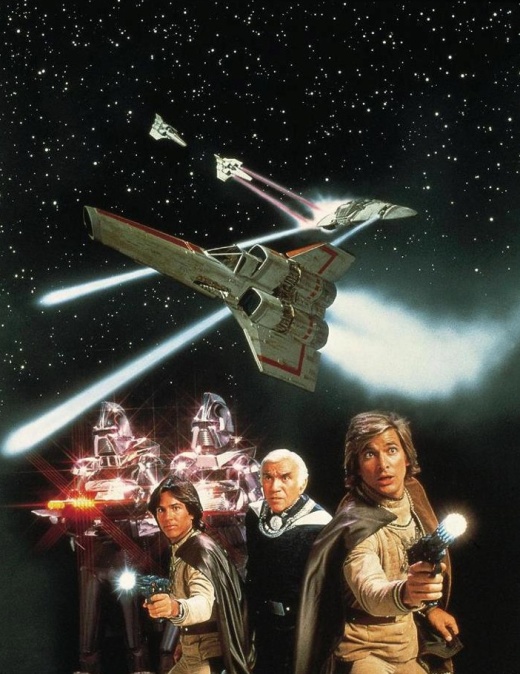 Series created by:  Glen A. Larson

Written by:  Glen A. Larson / Episode directed by:  Richard A. Colla

As the Twelve Colonies of Man prepare to establish an armistice with the Cylon Empire, the crew of the Battlestar Galactica discover that a massive attack is about to be unleashed…

Following the cultural explosion of Star Wars in 1977, audiences were hungry for epic science fiction whether it might be on the large or small screen.  Premiering in September 1978, Glen A. Larson’s Battlestar Galactica brought grand Star Wars style space opera to television, launching with the triple-length series opener “Saga of a Star World” which sees the Twelve Colonies of Man on the threshold of peace with the machine race known as the Cylons, who ultimately mount a devastating surprise attack, forcing survivors to flee their home star system.

Heading up the cast is Lorne Greene as the wise and noble Adama, commander of the ‘Battlestar’ Galactica who finds himself leading a fugitive caravan of ships carrying colony survivors away from the Cylon aggression.  Adama, ably supported by Terry Carter’s Colonel Tigh, brings hope to the remaining people of the Twelve Colonies as he announces his intention to lead them on a journey to seek out the fabled thirteenth Colony of Man…a place called ‘Earth’.  This quest drives the core mythology of “Saga of a Star World” and the rest of series as it unfolds against the backdrop of science fiction action and adventure.

Playing Adama’s son and chief pilot of the Galactica’s Viper fighter squadron, Apollo, is Richard Hatch who would receive a Golden Globe nomination for his role and would go on to portray the terrorist Tom Zarek in Ronald D. Moore’s 21st Century reimagining of Battlestar Galactica.  Hatch (who passed away last year) gives a committed performance and Larson’s script serves him well as he forms a relationship with Serina (Jane Seymour) and becomes a surrogate father to her son, Boxey (Noah Hathaway).

Another standout character (and probably the show’s most popular) is hotshot Viper pilot, lady’s man and Apollo’s best friend, Lt. Starbuck – played by future star of The A-Team Dirk Benedict.  The brotherly camaraderie between the two is a highlight of the original Battlestar and enriches the feeling of family between the principle characters, bolstered further by Hebert Jefferson Jr’s Lt. Boomer.  Despite the tragic circumstances that play out in “Saga of a Star World”, there’s still some light relief – principally Starbuck’s entanglement in a love triangle with Adama’s daughter Athena (Maren Jensen) and the enchanting Cassiopeia (Laurette Spang).

Adding to the Cylon threat is the treacherous Baltar (the excellent John Colicos, who would reappear throughout the series), whose collaboration with the Cylons leads to the downfall of the Twelve Colonies.  The Cylons themselves are a memorable and formidable enemy (that iconic swooshing red LED ‘eye’ later repeated in another of Glen A. Larson’s creations, Knight Rider).  They are commanded by the mysterious Imperious Leader, voiced by Patrick MacNee (famous for his role as John Steed in cult British fantasy spy series The Avengers) who also narrates Galactica’s opening monologue and would go on to play Count Iblis in the “War of the Gods” two-parter.

Battlestar Galactica was blessed with a large production budget (which ultimately lead to the cancellation of the series after 21 episodes, although it was shortly revived as the risible Galactica 1980) and thus for a late 70s SF television production the special effects for the time are fairly impressive – no small wonder given that they were produced under the supervision of Star Wars effects maestro John Dykstra – and numerous space battle sequences keep the viewer engaged in between the drama as the Galactica and the rag-tag fleet of survivors head out into deep space and on to their search to find Earth.  “Saga of a Star World” unfolds at a steady pace, following the opening decimation of the Colonies time is taken to flesh out the characters and deal with the crisis the survivors face in the wake of the Cylon attack.  Given the protracted running time it can feel a little slow in places but the pace picks up after the Galactica’s sojourn to a casino planet, whose hosts harbour a terrifying secret (adding a touch of horror to otherwise family-friendly proceedings) and leads into an action packed finale as Apollo and his fellow pilots take on the pursuing Cylon fleet.

This is Disco-era SF TV so there’s an element of camp when viewed today that may need to be excused on occasion but taken in context and with an open mindset the original Battlestar Galactica is actually quite a lot of fun and through its adventurous spirit and likeable characters it doesn’t fail to entertain and no doubt for viewers at the time, scratched that Star Wars itch.

An edited version of “Saga of a Star World” was subsequently released theatrically and is available on home video as Battlestar Galactica: The Movie.