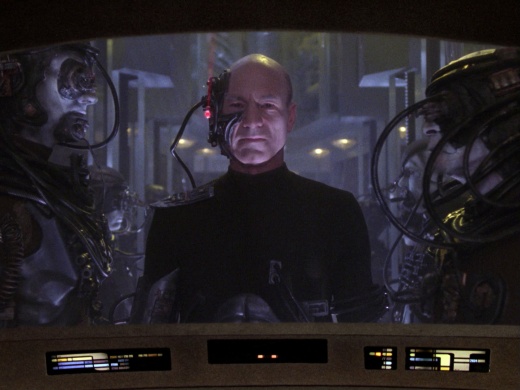 Captain Picard’s (Patrick Stewart) capture and assimilation by the Borg leads to a chilling cliffhanger in “The Best of Both Worlds” (image credit: CBS).

Investigating the annihilation of a Federation colony, Captain Picard and the crew of the Enterprise are soon faced with the unstoppable threat of the cybernetic race known as the Borg…

Considered as not just one of Star Trek: The Next Generation’s finest stories but top-tier Trek in general, “The Best of Both Worlds” is a gripping, well-written and superbly executed event in the popular Star Trek television sequel.  TNG’s first two-part episode and its first season cliffhanger, “The Best of Both Worlds” closes out the show’s third season and opens its fourth and features the return of cybernetic nasties the Borg – introduced in season two’s “Q Who?”.

Written by Michael Piller – whose tenure as head writer helped to improve the creativity of The Next Generation – and directed by Cliff Bole, “The Best of Both Worlds” sees the Enterprise tasked with investigating the destruction of a Federation colony, all evidence pointing to the Borg as those responsible.  Soon confronted with a Borg ship, events take a turn for the worst when Captain Picard is captured by the Borg and transformed into one of them – leaving first officer Commander Riker in command.  The Enterprise’s engines damaged, preventing it from pursuing the Borg vessel as it heads for Earth, Riker and the rest of the crew must find a way to stop the Borg at all costs – even at the loss of their former captain.

At this point the Borg are a relentless and unstoppable force – a superior foe whose only desire is to consume the technology of other worlds and ‘assimilate’ (i.e. transform) their population into cybernetically enhanced drones who operate as a collective consciousness.  The very notion of one’s individuality being stripped away is what makes the Borg such a chilling enemy and Piller ensures that those elements are accentuated.  The decision to have Picard captured and assimilated by the Borg (the difference being that he is given the designation ‘Locutus’ and his own voice as a representative of the Borg, allowing Patrick Stewart to interact with his cast mates), thus deprived of his free will and responsibility for his own actions, is a genius stroke that establishes high stakes and at the time with no guarantee of his rescue (rumoured contract negotiations with Stewart placing his future in doubt) kept things surprising and unpredictable – not in the least since all of Picard’s knowledge and experience are used by the Borg to deadly advantage as they plough through and decimate Starfleet’s defences. 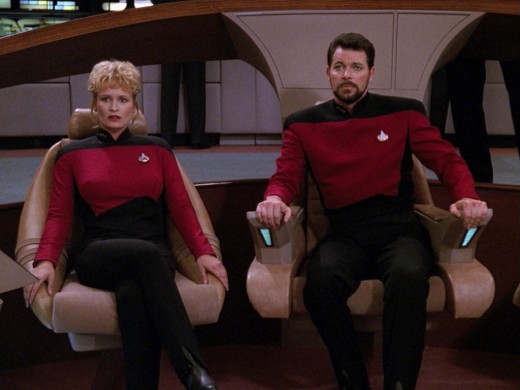 Guest star Elizabeth Dennehy with Jonathan Frakes in “The Best of Both Worlds” (image credit: CBS).

The cast are all – unsurprisingly – brilliant with each of the principals having their place in the story as Piller continues his efforts to have a more character driven focus for the series.  Patrick Stewart is the obvious standout (his ‘Borgified’ persona affording him fresh acting challenges) and Whoopi Goldberg’s Guinan continues to be a soulful presence but this is also a great outing for Jonathan Frakes who rightly gets his time in the spotlight as Riker, grappling with uncertainty about the progression of his career, takes command of the Enterprise during the crew’s darkest hour.  Guest star Elizabeth Dennehy (daughter of Brian) adds a lot to the mix as Starfleet’s Borg expert, Lt. Commander Shelby – a young, resourceful and driven officer whose assignment to the Enterprise initially provides conflict as her over-eagerness and professional competitiveness causes headaches for Riker, but ultimately proves an important ally and gradually earns the respect of the Enterprise’s new captain.

Whilst not necessarily as energetic and flashy as a lot of modern television (which isn’t actually always a good thing), there is still a lot of action and excitement in “The Best of Both Worlds” – most significantly the Enterprise’s first confrontation with the Borg vessel in part one, the subsequent chase (the Starfleet ship seeking refuge inside a nebula building a sense of foreboding) and Picard’s abduction a highlight.  Part two also has its share with Riker’s plan to rescue Picard and Worf (Michael Dorn) and Data’s (Brent Spiner) infiltration of the Borg ship the highpoint.  The final resolution of the Borg crises is simple but effective and the tension remains tight as the story reaches its climax.

Mention should also be made of Ron Jones’ score for “The Best of Both Worlds”, atmospheric, thrilling and emotional it’s some of the composer’s best work on Star Trek: The Next Generation and an essential component in any classic piece of SF TV.  Ranked by TV Guide as one of its all-time top 100 television episodes and nominated for five Emmy Awards, “The Best of Both Worlds” is a high mark in the Star Trek franchise and ensured its continued popularity throughout the 1990s.

With Captain Picard captured and assimilated into the Borg Collective and the fate of all life in the Federation at stake, Commander Riker has no choice but to order firing the Enterprise’s modified deflector in the hope of destroying the Borg vessel…

Star Trek: Voyager – “Endgame” : the crew of the U.S.S. Voyager are faced with the Borg in the feature-length finale to the fourth live-action Star Trek television series (read the retrospective here).