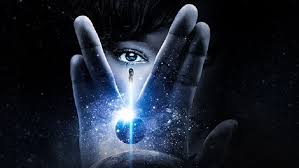 ‘Star Trek’ makes a much awaited return to television in ‘Star Trek: Discovery’.

Investigating an object of unknown origin, Lieutenant Commander Michael Burnham and the crew of the U.S.S. Shenzhou are thrown into a direct confrontation with old adversary, the Klingons.

51 years after the debut of its original series, Star Trek returns to the small screen after an absence of twelve years, following the conclusion of Star Trek: Enterprise – which left the air back in May 2005.  Produced by CBS for their All Access streaming service and rolled out worldwide courtesy of Netflix, Star Trek: Discovery is a lavish and promising addition to the Star Trek universe that feels fresh yet comfortingly familiar for long term fans of the franchise.  Created by Trek veterans Bryan Fuller (writer/co-producer on Star Trek: Voyager) and Alex Kurtzman (co-writer and co-producer of J.J. Abrams’ Star Trek and Star Trek Into Darkness), the series takes place ten years prior to the voyages of the U.S.S. Enterprise under the command of William Shatner’s Captain Kirk.

Serving as a prologue to the rest of the show’s fifteen-episode first season (the majority of the principal cast and the U.S.S. Discovery herself being absent until episode three), the two-part premiere gets things off to an engaging and intriguing start as we’re introduced to Discovery’s lead character, Lieutenant Commander Michael Burnham (Sonequa Martin-Green) as she serves as First Officer on board the U.S.S. Shenzhou, commanded by Captain Phillipa Georgiou (martial arts legend Michelle Yeoh) who quickly find themselves thrust into a tense confrontation with a rogue Klingon faction that places the Federation on the precipice of war.  Burnham’s back story is revealed via a series of flashbacks as we follow her from being orphaned as a child to being raised on Vulcan by ambassador-in-waiting and father of Spock, Sarek (Gotham’s James Frain) and her eventual assignment to the Shenzhou.

What’s clear from the outset is that the creators of Discovery have set about establishing something that manages to strike a delicate balance between producing a series that will not only appeal to fans but draw in a whole new generation of viewers.  After 51 years and some 700+ hours of television, engineering a fresh take on an old favourite is no easy task, yet Discovery achieves this quite successfully.  The first major departure is the decision to not have the series focus on the ship’s captain and proves a welcome one with Sonequa Martin-Green (The Walking Dead) turning in a decent performance and demonstrating plenty of potential as a strong and capable lead.  There’s also the heavily serialised nature of the story, whilst a construct employed in previous spin-offs Deep Space Nine and Enterprise it’s utilised to a more intricate degree here in accordance with co-creator Bryan Fuller’s intentions for the storyline to unfold episode by episode like the chapters of a novel. 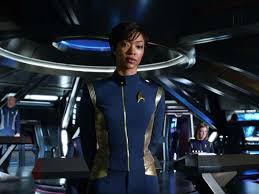 Michelle Yeoh provides another strong female presence as Georgiou and there’s a wonderfully nuanced relationship between herself and Burnham (affectionately referred to as “Number One” in a nod to Majel Barrett’s character in original Trek pilot “The Cage”), the former bringing an almost maternal quality to her ‘role’ as mentor to the younger officer.  Martin-Green also has some great interplay with Doug Jones’ Lt. Saru, the Kelpien science officer who has a fun sibling-like rivalry with Burnham.  Much like he did in Hellboy and Falling Skies, Jones is once again a master at conveying subtle strokes of humanity through the prosthetics and alien characteristics.  James Frain evokes the requisite measure of wise intellect and cold logic in the role of Sarek (originally portrayed so unforgettably by the late Mark Lenard) and similarly to Yeoh, there’s a paternal element to his dynamic with Martin-Green’s character.

The Klingon threat is spearheaded by T’Kuvma, with Chris Obi infusing the part with the right amount of that familiar warrior instinct, although the redesign of the Klingons themselves is likely to be the most controversial aspect of Discovery.  They’re radically quite different and take some getting used to, yet the make-up and costume design is certainly impressive and gives the iconic race an appearance that’s more alien whilst retaining the overall Klingon ‘feel’ with an adherence to their principles of honour and glory in battle.  What’s interesting here is that the Klingon Empire has fractured into numerous disparate ‘houses’ which T’Kuvma seeks to unite and lead, fanatically, into war against the Federation in the name of Kahless – the forefather of Klingon society itself.  It’s handled in a manner that’s not quite as black-and-white as that sounds and there’s a definite sense that the writers are seeking to add dimension to the conflict by offering a deeper insight into the Klingon’s motivations. 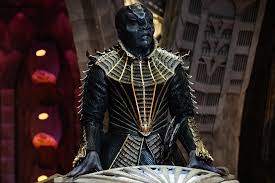 The Klingons are given a new look for this new iteration of the long-running franchise.

Visually, CBS have spurred no expense with feature film quality effects, make-up and set design fully on display.  Perhaps wisely, given the level of the production, the producers have leaned towards a look more reminiscent of the alternate universe established on the big screen by J.J. Abrams’ Star Trek.  As classic and iconic as the look of the original series is, a direct translation wouldn’t hold up to viewers in 2017 and it only increases the scope and cinematic quality of Discovery.

Star Trek is heralded for its ability to delve into the human condition and comment on the issues of the day and in this era of social and political concerns and the rising threat of terrorism and religious extremism, Discovery is no different and deftly weaves these themes throughout.  This is what Gene Roddenberry and the writers of the original Star Trek always intended, coupled with rich characters and a vision of a hopeful, inclusive future for humanity – even in times of conflict – and there’s great potential for Star Trek: Discovery to continue that tradition.

The bottom line:  Star Trek makes a confident return to television with a visually dazzling premiere, bolstered by a promising lead and the potential to explore real-world topics in an engaging and entertaining manner.

New episodes of Star Trek: Discovery (as well as post-show discussion After Trek) can be seen weekly via subscription services Netflix (worldwide) and CBS All Access (U.S. only).

What did you think of the ‘Star Trek: Discovery’ premiere? Share your thoughts in the comments section below!

After months of speculation and behind the scenes delays, CBS has announced that production has commenced on Star Trek: Discovery with a painfully brief but non-the-less tantalising video giving short glimpses of some of the series’ production design (including the currently vacant Captain’s chair):

The sixth live-action Star Trek television series, Discovery was originally set to debut this May but with the departure of showrunner Bryan Fuller and casting announcements to be completed, CBS has wisely postponed the launch date indefinitely until all the pieces are fully in place and to ensure the series can ultimately live up to both its potential and the anticipation of millions of devoted fans the world over.

At this point little is known about the overall concept of Star Trek: Discovery bar that it will take place in the ‘Prime’ Star Trek universe (and therefore not connected to the current big screen alt-universe established by J.J. Abrams’ Star Trek) around ten years prior to the original Star Trek television series and will focus on the crew of the U.S.S. Discovery, principally the as-yet-unnamed Lieutenant-Commander to be played by The Walking Dead’s Sonequa Martin-Green .  Joining Martin-Green are Doug Jones (Hellboy, Falling Skies) as Science Office Lieutenant Saru – a member of an alien race that will be new to the franchise – along with Anthony Rapp as Lt. Stamets, the first openly gay regular character for a Star Trek series and Gotham’s James Frain as Sarek, the very same Vulcan ambassador and father of Spock played in the original Star Trek series and films by Mark Lenard.  Michelle Yeoh (Crouching Tiger, Hidden Dragon) will also feature as Captain Georgiou who will command another Starfleet vessel, the Shenzhou together with three Klingon characters to be played by Mary Chieffo, Shazad Latif and Chris Obi.

Despite his departure from the series, Bryan Fuller (who has history with the franchise, having launched his career on Star Trek: Deep Space Nine before serving as a writer/producer on Star Trek: Voyager) had already mapped out the serialised storyline of the show’s first thirteen-episode season as well as having written the opening two-parter and will retain a credit as executive producer.  Showrunner duties will now be handled by Gretchen Berg and Aaron Harberts with Eugene Roddenberry (son of Star Trek creator Gene Roddenberry) on board as an executive producer and Nicholas Meyer, director of feature films Star Trek II: The Wrath of Khan and Star Trek VI: The Undiscovered Country (also serving as co-writer on the latter as well as on Star Trek IV: The Voyage Home) in place as a writer and consulting producer.

Co-created with Alex Kurtzman, co-producer/co-writer of the J.J. Abrams directed Star Trek and its sequel Star Trek Into Darkness, Star Trek: Discovery will launch in the U.S. later this year via streaming service CBS All Access (with the premiere episode airing on network television) and will be available worldwide via Netflix. 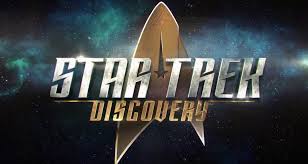 Are you excited about Star Trek’s return to television?  Share your thoughts below!