Hydra has taken control with Steve Rogers as its leader…can the remnants of the superhero community prevail and restore hope before all is lost?

Building on the prelude chapters in Secret Empire #0 and the Free Comic Book Day issue (and spilling out of the pages of Nick Spencer’s Captain America: Steve Rogers series), Secret Empire #1 thrusts readers into the midst of Marvel’s latest comics event.  You’d be forgiven for finding the word “event” wearying, especially with the disappointment of Civil War II still lingering in the thoughts of many, but with this opening salvo and the shocking revelations of issue #0 it seems that writer Nick Spencer is stirring up a rich brew that will truly shake up the Marvel Universe.

As even the most casual comics reader will by now be aware, Secret Empire is the culmination of Hydra’s plans to seize control of the United States – and the free world beyond – with Steve Rogers’ Captain America as their leader.  The reveal of Rogers’ Hydra allegiance (thanks to some reality altering meddling via a sentient cosmic cube named Kobik – see the Avengers: Standoff crossover) way back in the premiere issue of Captain America: Steve Rogers caused significant controversy, with heavy ripples of discontent still reverberating throughout fan circles.  To see Marvel’s greatest patriot become a symbol of evil is understandably distressing and although Spencer has not been restrained in this regard, he has managed to construct a compelling arc that any true fan of comics should approach with an open mind.

With Secret Empire #1, Spencer keeps the controversy flowing as we skip ahead some months after issue #0 with citizens of the U.S. under the rule of Hydra and kept in check by Steve Rogers and his forces.  With the bulk of the superhero community either stranded in space battling endless hordes of Chituari or trapped beneath a Darkhold ‘bubble’ over Manhattan, it’s left to an underground resistance lead by Black Widow and Hawkeye to plot Hydra’s downfall.  Whilst new readers will likely be lost (luckily Marvel have just published catch-up collection The Road to Secret Empire), having the story told mainly via the perspective of a young schoolboy named Rayshaun helps to ease us in without an overload of exposition as images of schoolchildren raising a ‘Hail Hydra’ immediately establish that there is an ominous shift in the Marvel U’s status quo.

What Spencer does with Steve Rogers is not to make him purely evil in a one dimensional sense, whilst he may not be the hero we’re familiar with there are layers to the characterisation as he paints a man who feels he is simply doing what is right in the circumstances of his altered history.  Despite the revelations of issue #0 as to the nature of these ‘alterations’ it’s unlikely that Marvel will facilitate a complete and permanent perversion of such a beloved and treasured character.

Secret Empire also has some definite parallels to the current political climate and tenuous international situations we see playing out in the news every day.  To Spencer’s credit it doesn’t feel totally overt or unnecessarily forced in the face of the reader but it’s there as much or as little as any individual might wish to read into it.

It might be dark and pessimistic stuff but there’s still a layer of hope and even fun as the younger, brighter Marvel heroes of the resistance, including Miles Morales’ Spider-Man, Amadeus Cho’s ‘Totally Awesome’ Hulk and Riri Williams’ Ironheart take the share of the action and together with the ever-loving blue-eyed Thing provide some much needed beats of humour and optimism.

Visually, Secret Empire #1 is solid albeit the usual sharpness and detail of Steve McNiven’s pencils are a little muddied by the dark, washed-out colours by Matthew Wilson.  It’s by no means as stunning as McNiven’s work on the original Civil War or Old Man Logan but decent enough and a good fit for the overall tone of the book.  It’ll be interesting to see how much consistency can be maintained with the rotation of numerous different artists on the nine issue series.

Controversies aside, Secret Empire is making for enjoyable reading and will surely pave the way for the hope and heroism promised by Marvel’s forthcoming Legacy initiative.

The bottom line:  A strong ‘start’ to yet another Marvel Comics event but one that builds on an already solid foundation as Nick Spencer presses forward with Hydra’s domination of the Marvel Universe.

Secret Empire #1 is published by Marvel Comics and is available in print and digital formats now. 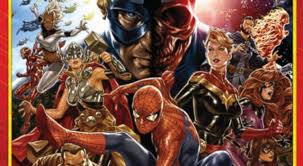 Hugh Jackman hangs up those iconic claws in a fitting farewell…

Logan – the mutant once known as Wolverine – now spending his days caring for a frail Charles Xavier, is thrust into one last adventure as he travels across North America in search of a place of safety for the mysterious young mutant named Laura…

Seventeen years after making his debut as the iconic Marvel Comics character Wolverine in Bryan Singer’s X-Men, Hugh Jackman delivers a career-high performance in his much touted final appearance as the adamantium-clawed hero.

Taking place in 2029, at a time when there are very few mutants left, Logan (based loosely on the “Old Man Logan” comic books by Mark Millar and Steve McNiven) sees the man once known as ‘the Wolverine’ in a dark place in ever darker times.  His mutant healing abilities diminishing, Logan now goes by the name of James Howlett scraping together a living as a limo driver to pay for medication to subdue the increasingly uncontrollable mental powers of an elderly Charles Xavier.  Heavily burdened and wearier than he’s ever been and turning to alcohol to numb pains both physical and emotional, Logan seems to have no purpose until he meets a young girl named Laura who he discovers has abilities much like his own.  With Laura being tracked by a team of mutant hunters (lead by Boyd Holbrook’s Donald Pierce), it’s not long before the trio of Logan, Xavier and Laura hit the road in search of safety.

Written and Directed by James Mangold – who also tackled Jackman’s previous solo outing in The Wolverine – Logan is an atypical breed of a superhero film, of course it has the comic book/science fiction elements that come with the territory, but it largely plays out as an intimate, quite often brutal character drama and a journey that’s both thrilling and sombre as it evokes nifty vibes of the classic western and Mad Max.

Whilst not being overly concerned about continuity, there are still hints and references to Logan’s overall placing in the X-Men film universe without becoming burdened by it, the history of the X-Men themselves almost mythologised in the pages of dusty old comic books.  It’s a standalone story that anyone can enjoy but all the more effective and satisfying for those who have followed the screen exploits of Messrs Jackman and Stewart all of these years.

Jackman excels in the lead role that has defined his career, delivering his gruff and grizzly best with more than a few shades of melancholia.  Equally impressive is Patrick Stewart who relishes in providing a deeper and more complex portrayal of Charles Xavier than we’ve ever seen that’s as crushingly tragic as it is at times outright funny.  As Laura, Dafne Keen makes a strong and memorable screen debut, playing an important part in making the growing bond between Logan and the young mutant one of the film’s clearest highlights.

Whilst Logan doesn’t feature the elaborate CGI spectacle and destruction we see in the main X-Men film series it’s certainly not short of action and given the film’s adult rating (15 certificate here in the UK, R-rated in the States) we get to see Wolvie fully unleashed in no holds-barred, Berseker Rage fuelled combat.  It’s unapologetically brutal, shockingly visceral and it’s what all Wolverine fans have wanted to see for a long time.

Logan does at times feel a little too slow and drawn out, yet just about manages to not completely drag and is made up for by the strong performances of the central cast and it’s moments of cutting, blood-soaked action.  In the end, Logan comes out as a satisfying finale that aptly closes out to the gravely, aged tones of the late Johnny Cash.

The bottom line:  Hugh Jackman bows out in a fittingly dramatic and brutal finale to his tenure as the iconic Wolverine in a film that binds fine performances with well-drawn character drama.

Logan is in cinemas now.