that’s far from being a typical blockbuster…

Directed by:  Denis Villeneuve / Written by:  Eric Heisserer (adapted from the short story “Story of Your Life” by Ted Chiang)

When strange alien vessels appear around the Earth, linguist Louise Banks is called upon by the U.S. Military to try and communicate with the mysterious visitors…

Wowed by critics and earning a respectable box office gross on its theatrical run late last year, director Denis Villeneuve’s intelligent and mesmerising sci-fi mystery has far more in common with the likes of Stanley Kubrick’s 2001: A Space Odyssey, Andrei Tarkovsky’s Solaris and Christopher Nolan’s Interstellar than more straight forward, crowd-pleasing (but generally enjoyable on their own merits) alien invasion blockbusters such as Independence Day.

Based on Ted Chiang’s short story “Story of Your Life”, Arrival (not to be confused with the Charlie Sheen starring bargain-bin 1996 B-movie The Arrival) is beautifully acted, hauntingly realised and thought provoking with its intellectually challenging and mind-bending hard SF concepts that shuns the more generic, formulaic and predictable tropes that all too often afflict the genre.

Arrival concerns the mysterious appearance of twelve pebble-like extra-terrestrial vessels around the globe and the efforts to form a means of communication with the alien visitors and discover their intentions and purpose for coming to Earth.  Heading up the central cast is Amy Adams as Louise Banks, a linguistics expert enlisted by the military to board the alien ‘shell’ floating above the United States.  Sorely overlooked at this year’s Academy Awards, Adams delivers a powerhouse performance that subtly yet believably conveys the intellect and emotional strife of her character.  Supporting Adams is Jeremy Renner as physicist Ian Donnelly, a role that demonstrates his ability to stretch beyond the action-star heroics of the Mission: Impossible and Avengers franchises.  Completing the central core of characters is Forest Whitaker in a suitably authoritative turn as Colonel Weber.

Avoiding cliché, Arrival depicts the reaction of the global governments, their military solutions, the awe of the scientific community and the escalating panic of the world’s population with a laudable degree of realism and plausibility, presenting a painfully true reflection upon the world as it stands today.

Earning plaudits for his work on Sicario, Denis Villeneuve – currently putting the finishing touches to Blade Runner 2049 – brings strokes of arthouse cinema to Arrival whilst maintaining a focus on the principal cast, keeping the overall experience dazzling and captivating via Bradford Young’s incredible cinematography and Johann Johannsson’s wonderfully atmospheric and immersive music score (embellished by the film’s inspired audio design), skilfully ratcheting up the tension as the final act satisfyingly unfolds.

Sure to be revered as a modern science fiction classic in the years to come, at its heart and beneath heady intellectual ideas, Arrival contains messages about communication and understanding that expresses a sense of hope, even in the face of darkness.

Arrival is available to own on Blu-ray, DVD and digital formats now. 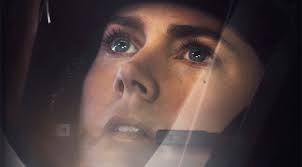